By Kathleen Kendall-Tackett, PhD, IBCLC, author of Depression in New Mothers and co-author of The Hidden Feelings of Motherhood 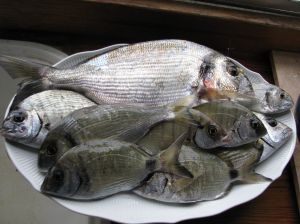 Becoming a mother can be wonderful – and highly stressful. Sleepless nights, breastfeeding difficulties, a history of trauma, low partner support, or a baby with health problems are all stressors that can put you at risk for depression. Fortunately, there are some steps that you can take to help you cope.

Does it seem like more and more people you know are depressed? You’re not imagining things. Depression is on the rise worldwide. And much of this increase is due to what we eat. Over the last century, we’ve increased the amount of Omega-6 fatty acids in our diets, while simultaneously decreasing the amount of Omega-3s.

Omega-6s are found in vegetable oils, such as corn and safflower oils, and are a staple of many processed foods. Omega-3 fatty acids are polyunsaturated fats found in plant and marine sources, and most Americans are deficient in them. As a result, we are at risk for a whole host of problems – including depression. And pregnant and postpartum women are especially vulnerable.

The mental health effects of dietary Omega-3s can be seen in several recent studies. These studies found that populations with higher levels of Omega-3s in their diets had lower rates of major depression, postpartum depression, bipolar disorder, and even suicide.

Inflammation in Pregnant and Postpartum Women

This change in our diets does bad things to our bodies. While we need some Omega-6s, most Americans get way too many. And excessive Omega-6s increase inflammation, which increases risk of depression. This is especially true for pregnant and postpartum women.

During the last trimester of pregnancy, inflammation levels naturally rise in anticipation of birth. These inflammatory cells have a good purpose: they help your body prepare for labor and also help you fight infection after your baby is born. In addition, normal postpartum stressors, like sleep deprivation, can raise inflammation levels. This is part of our normal stress response. But when combined with the changes associated with pregnancy and postpartum, inflammation levels can get too high.

Inflammation can potentially lead to another problem for pregnant women: preterm birth. In one study, women who were depressed during their pregnancies have more than double the risk of having a preterm baby, and inflammation is the likely culprit.

Interestingly, when pregnant women who were at risk for preterm birth were given eggs enriched with an Omega-3 (DHA), the length of their pregnancies increased by an average of six days.

Pregnant and postpartum women are especially likely to be deficient in Omega-3s because babies need these fatty acids for their developing nervous systems. In a 2005 study of mothers in Australia, research shows that babies need about 67 milligrams a day of DHA for their development. In contrast, Australian mothers were consuming about 15 milligrams a day – well under what was required.

Babies will take what they need from maternal stores, and mothers’ stores become further depleted with each pregnancy, further increasing their risk of depression.

Omega-3s are Not Created Equal

Go into any well-stocked supermarket and you will see a dizzying array of foods that are fortified with Omega-3s: eggs, cereal, soy milk, snack bars. With regard to depression, Omega-3s are not all created equal. If you are interested in Omega-3s for depression, it’s important to know what you are buying.

Many products that list Omega-3s contain alpha-linolenic acid (ALA). ALA is the Omega-3 found in flaxseed, walnuts, and other plant sources. It is an essential fatty acid and is beneficial to cardiovascular health. But it is not effective in either the prevention or treatment of depression. If you want the antidepressant effects of Omega-3s, you must look for foods or supplements containing the long-chain Omega-3 fatty acids: EPA and DHA.

Getting EPA and DHA from seafood can ease depression. However, seafood contaminated with mercury and other compounds is a significant health hazard. As a pregnant or postpartum woman, you cannot safely eat enough fish in order to get an antidepressant effect. Knowing about the effects of contaminants in seafood are particularly important for you since they can have a negative impact on your baby’s developing nervous system.

Fortunately, there are many sources of EPA/DHA that are safe to take. Some sources include DHA alone, which can help prevent depression. Fish-oil supplements contain both EPA and DHA and have been used to treat depression, sometimes in conjunction with medications.

For prevention of depression: 200-400 milligrams DHA

Sources of both pharmaceutical-grade and over-the-counter fish-oil products verified by the U.S. Pharmacopeia (www.usp.org) are widely available. All of these brands are tested for contaminants and are safe for pregnant and breastfeeding women to take. Be sure to discuss any supplements you take, including Omega-3s, with your health care provider as they can potentially interact with a small number of prescription medications.