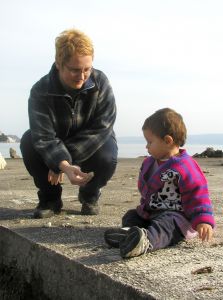 A child with a secure attachment to his mother at preschool age is likely to form closer friendships with peers, according to a study published in Child Development. The article, “Bond with Mom Helps Kids Make Friends,” available on LiveScience.com, describes how the mother-child emotionally healthy relationship models what a positive relationship is to look like with others outside this parent-child bond.

Researchers at the University of Illinois also found securely attached children were less likely to form biases toward others. The study included three year olds and four-and-a-half year olds, and assessed how openly the children and mothers acknowledged and communicated their emotions. In addition, the four year olds — and again in first grade — were assessed for language ability and hostile reactions in playground social situations. Mothers and teachers were asked to report on the child’s general peer competence in first grade, and then the quality of the child’s relationship with his closest friend in third grade.

What researchers found were that children who were securely attached to their mothers at age three showed more open emotional communication and language ability at four and a half. Open emotional communication predicted fewer hostile reactions in first grade and greater friendship quality in third grade. These findings suggest that secure attachment teach children how to correctly interpret others’ behavior sooner than children with insecure attachments to their parents, and that they develop comfort in talking about emotions, especially negative, sooner — which leads to closer friendships.