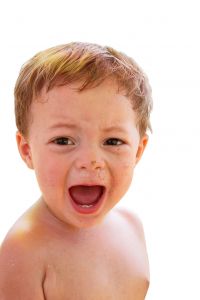 With toddlerhood comes tantrums. While some parents are taken by surprise by the seemingly violent appearance of a child raised in a non-violent home, it is a perfectly natural rite of passage for any child. The reasons behind it are simple: lots of emotions with little logic. The emotions that can overtake a toddler can be a floodgate of overwhelming proportions.

While watching their sweet angel turn into a hitting and kicking tornado may leave some parents at their wits’ end, the idea is not to suppress your child’s anger or frustration but to teach him to control them. In a young child, the strength of his emotions can be scary for him, also. That’s why it’s important that the parents stay in control of themselves during a tantrum. When you do, you are showing him by example how to maintain calm in stressful situations, even if it doesn’t seem like he’s getting that picture yet. If you’re out of control, then you are in effect asking your child to do what you cannot: calm his intense emotions. In this situation, a child’s fear of his “out of control” emotions may eventually escalate into what psychologists call magical thinking, according to Abnormal Psychology by Leonard Zusne and Warren Jones. “If mommy can’t handle my emotions, who can? They must be too strong for anyone.” This could lead to an abundance of issues in adulthood.

No one is perfect – at least, no one I’ve met. The best of parents will occasionally fail to maintain perfect calm and no one will be injured for it, but on the whole that is the goal. If you empathize – put yourself aside and try to see things from your child’s point of view – it is easier to be compassionate and not lose your cool.

Give It an Outlet

Anger isn’t a very fun thing to have bouncing around in your insides. It’s got to come out somehow and  preferably in a way that is acceptable to the rest of the family. For me, I’ve found that some wonderful advice, such as handing my son a crayon and asking him to draw his emotions, didn’t apply to a child under three. When my two year old would try to hit me, I’d take his hands and say, “You’re really mad! I know you’re mad! Hit your hands together!” I’d pretend I was mad, too, to show him. I’d clap my hands together, growl, and say “I’m mad!” He’d clap his hands together as hard as he could and growl.

Part of why this tactic works for him is he feels validated. Validation involves listening to your child, then reflecting back to him what he is feeling.

We all feel sometimes like we are speaking a foreign language. We’re trying to talk, but the person we are talking to just doesn’t “get it.” If it’s someone very important to us, this can lead to a rainbow of very ugly feelings like frustration and despair. To a child experiencing this, those feelings can quickly escalate into rage and hopelessness. This is true from birth. Crying is the only language that infants possess. Picking up our babies to comfort them instead of letting them “cry it out” is the earliest form of validation.

When our babies grow into toddlers, their ways of communicating have evolved a little bit but not that much. It’s still a rare child who can always rationalize what he is feeling and communicate his needs. Many adults haven’t mastered that skill! It is still up to us to help them recognize what they are feeling, identify it, and work through it.

To a baby, it is enough to pick them up and change his diaper when he’s wet. They learn that “Oh, I was uncomfortable, because I was wet. Mommy fixed that.” They not only get a clean diaper but two added bonuses: They learn why they were unhappy, and they learn that someone cared enough to see it and fix it. Knowing that someone cares enough to do that for you is one of the basic emotional needs of humanity. Relationships of all types are won and lost in that regard.

A two year old is just entering the real meat of the emotional arena. Some see their constant need for emotional reassurance as manipulation or a weakness that must be toughened up. But humans are hard-wired to seek out validation at any age. We must know from someone that we are OK as we are, cared for, and loved. A toddler especially is in an age of discovery: so many new challenges and things he is learning to do, and having trouble doing, and things he can’t or isn’t allowed to do. It can all tie in to a child’s sense of self-worth. The newness that a toddler finds herself suddenly experiencing leaves her needing more reassurance.

Most of the time, it is relatively easy to validate a child. All you have to do is pay attention, and reflect back what you see. ”I know you’re mad, (sad), (frustrated), (you’re smiling, are you happy today?)” A validated child feels loved and in sync with the world.

I could tell that my son and I were making progress when we were in the mall and he wanted to go play in the toy store. Again. We were on our way out, and we had already stopped there earlier. I told him “No, it was time to go home.” He drug his feet and finally sat down and said, “I’m mad!”

“You’re mad?” I replied. “I know you’re mad! I know you wanted to play with the toys. But we still have to go now.”

He climbed to his feet and came with me without any more protest. He had just wanted me to know that he was mad. I was proud of his ability to tell me what he was feeling instead of throwing a fit.

Children love to play pretend, and it can be rewarding and fun for an adult to play, too. It is also a wonderful learning tool. Adults can use pretend to teach a child what to do when a real situation arises.

“Pretending that you’re mad” is a fun game for most children. This is the easiest time to show them healthy ways to be angry. This play time gives your child the opportunity to decide what works best for him, or to even come up with his own stuff. One of our favorite books, My Two Hands, My Two Feet by Rick Walton and Julia Gorton, has a line that says: “When I’m mad, I stomp my feet, like drummers as they beat, beat, beat.” My son would joyfully pretend that he was mad and stomp his feet.

The next time he’d get really mad, I’d say, “You’re really mad! Stomp you’re feet; you’re so mad!” And he would, crying through his tears, “Beat, beat, beat!”

It takes repetition for a child to learn to use their new diversion instead of hitting mommy or daddy, or the cat. That’s when you’d just gently take their hands and say, “No, don’t hit Mommy. If you’re mad, clap your hands together.”

Sometimes, the best way to teach is by example. Some days we all just get overwhelmed. When you’re upset and he’s yelling, an honest “I’m mad!” said in a childish, exaggerated way may feel silly coming from mommy, but you’re showing your child that you’re human, too. This could be when that light of dawning association may occur: “Mommy said it like I say it. Is she feeling like I felt yesterday?” This is the beginning buds of empathy. As parents, this is one of our ultimate goals! A child who learns healthy ways of handling his emotions will feel emotionally balanced and more in tuned to everyone else around him.

Keep a Sense of Humor

You’ve talked, you’ve validated, he’s still “mad,” and you’re both a weepy mess. It’s time to change the subject. Children have a harder time walking away because for them, everything is now. Joke, make light of the situation (but never make fun of him!), and have fun. Kids are very eager to play – it’s what they do! As parents, it’s important for us also to remember that it’s not the end of the world. Tantrums happen. It’s not a personal attack; it’s just childhood.

Whatever methods you prefer, the important thing is that, as parents, we work towards showing our children what to do when they are angry or upset.  When we do that, we are also showing them that it is OK to feel the way they do. There is no shame in feeling angry. With this validation, they can go on to eventually learn more mature ways of dealing with their emotions.

How do you help your toddler deal with her anger?

3 thoughts on “Diverting Anger in Toddlers”