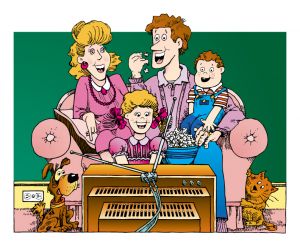 Most parenting experts advise that parents use extreme caution in allowing their child to watch television, especially younger children, and even with educational programming. And many attached parents either don’t allow television at all or only sparingly. But there are some of us who do allow our children to watch TV and are OK with it.

A study by the University of Washington and the Seattle Children’s Research Institute, published in Pediatrics and Adolescent Medicine in June 2009, determines that television-watching significantly delays language development in young children. The reason is, children learn to talk from listening to their parents and when the television is turned on and is audible, parents are less likely to talk to their children.

But what exactly about TV puts children at risk for these problems? The reason is because TV is meant to be a source of entertainment, not a teacher or babysitter. Yes, television captivates children’s attention and can keep them from busy for long periods of time – long enough for a parent to get some chores, work, or a hobby done. But, it’s because TV makes it so easy for parents why it makes it so wrong. It’s not the TV in and of itself putting children at risk of these problems; it’s the parents who aren’t interacting with their children and who aren’t setting boundaries on what their children view, as in the case of violence, sexual behavior, and bad language.

According to the National Institute on Media and the Family, media exposure on children affects their brain development as any other influence, such as parents and teachers. Allowing children to watch sexual or violent material isn’t entertainment – it’s education. As parents, we need to be careful what we’re allowing our children to learn.

So, why not just turn off the TV? Well, many parents do choose this option. But, TV is a part of our culture, just as are cell phones and Internet, and all of these electronics are being incorporated into more of our lives. We can just turn the TV off, or we can teach our children how to use the TV appropriately.

When TV is Good

Regarded for what it is, mostly entertainment, families can use television much as they would a book – helping to provide children exposure to new ideas. As long as the show is developmentally appropriate, small doses of television aren’t harmful. For example, my children enjoy watching Nature on the Public Broadcasting Service which takes viewers all over the world to see wildlife and natural habitat.

Some educational programming is OK, too. According to the Center for Media Literacy, some educational programming each week improves preschoolers’ standardized test scores. Many a foreign-speaking family credits television to learning their home country’s language. And, obviously, the older the child, the more she can learn from watching television, such as keeping up on current events or watching shows that explore science or history. Although many experts don’t give too much credit to TV, educational shows are created using child development specialists and on the back of research studies.

Still, parents should screen all shows before allowing their children to view it, including so-called kid-friendly cartoons, and also watch their child’s reaction to the show. For example, I only let me children watch the “Elmo’s World” on Sesame Street because some of the rest of show didn’t sit well with me. There is sometimes a play on a popular song whose original lyrics I know are not kid-friendly. Plus, while my children were entertained, I would rather have a television program that engages my children enough that they are excited to tell me what they learned later. I am a big fan of Word World on the Public Broadcasting Service, which literally taught my three-year-old her alphabet, and Barney because it inspires my children to get up and dance to the music, and not just sit passively watching the TV.

Used appropriately, television can help some families bond. My family has a movie night each week. We make homemade popcorn together, snuggle up on the couch, and turn on a movie, sometimes a DVD and sometimes on a television network. If the movie is on the television network, we mute commercials and take that time to talk to each other. My children look forward to movie night as a time to do something together just like when we go on a bicycle ride or do another family activity.

The big take-home message is, watch what your kids are watching and know the influence of the content they’re viewing. Also, it’s very important to put some limits on your child’s viewing time. The American Academy of Pediatrics and other experts recommend no TV time the first two years of life and a limit of two hours for children ages two years old and older, no TV in children’s bedrooms, and no TV during family mealtimes.

A Word about Commercials

There is a component to television that all parents must beware, and that is the advertisements. We can screen television shows and choose age-appropriate programming, and we can limit our children’s time watching television, but commercials are insidious. You may think your children are safe watching Dora the Explorer, and up pops a commercial touting the deliciousness of some unhealthy snack.

Advertisements are designed to persuade. Many commercials aimed at children are to sell a product, such as a toy or food, and besides when your children bother you about wanting to buy such and such, you may not think much more about it. But it’s important, if you allow your children to watch TV, to realize just what the television is exposing your child to. Start to study the commercials that interrupt the shows your child and your family watch. From sexual innuendos to sell clothing to a promo for a violent movie, you’ll start to notice what advertisers are using to try to influence you – and your children – to do what they want you to do.

According to the Campaign for a Commercial-Free Childhood, marketing is directly linked to childhood obesity and is a factor in the development of eating disorders, precocious sexuality, youth violence, family stress, and children’s reduced ability to play imaginatively. And advertisers want our children’s minds: Companies spend about $17 billion each year marketing to children. TV alone bombards children ages two to 11 years old with more than 25,000 advertisements, which doesn’t include placement of products within television shows and movies. Children under 12 years old influence about $500 billion in purchases every year. Children under 14 years old spend $40 billion each year, and teens spend $159 billion.

There are a number of ways you can reduce influence from commercials while watching the television:

5 thoughts on “TV as a Parenting Tool?”