By Dr. Maryann Rosenthal, co-author of Be A Parent, Not A Pushover, reprinted with permission from DrMA.com 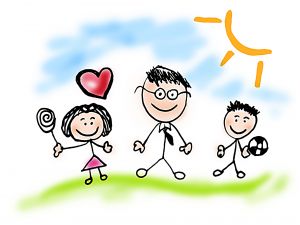 I believe it’s that overall style or pattern of action — rather than a specific decision — that will most affect a child’s behavior. Generally, psychologists have found that there are two main components of parenting styles.

One is responsiveness, or how much independence you’re willing to grant. The other, for lack of a better word, is demandingness — how much strict obedience you require. How much obedience parents demand, how much freedom they grant, and how these two behaviors mesh go a long way toward defining the parents’ style.

These parenting styles fall into a generally accepted four broad categories. Though different researchers give different names to them, the styles usually are said to be: Authoritarian, Authoritative, Permissive, and Uninvolved.

Authoritarian parents are very strict and controlling. They have a strong sense of justice and of the need for obedience. They’re big believers in clearly stated rules. If their kids don’t “see the light” (behave as ordered), then those teens will “feel the heat” (be punished). Such parents take a dim view of being challenged. Give-and-take with their children is discouraged.

Thus, these parents are highly demanding but not very responsive. Researchers believe children of authoritarian parents tend to be timid, have lower self-esteem, lack spontaneity, and rely to an unusual degree on the voice of authority.

While retaining authority and control, these parents are warmer and more communicative than Authoritarian parents. Authoritative parents seek a balance between the teens’ desire for independence and the parents’ desire to be listened to. These parents are demanding and responsive. They’re assertive but not intrusive or restrictive. They want their children to be assertive as well as socially responsible and self-regulated as well as cooperative.

Permissive parents, while often warm and accepting, make few demands on their children. They’re lenient, avoid confrontation, and allow considerable self-regulation. They may worry about thwarting the child’s creativity and sense of self. They’re much more responsive than they are demanding.

Sometimes the Permissive style is based on confusion. The parents are so out of touch with the pre-adolescent and adolescent world that the best they can do is to try to be a pal to their child. So they tend to give their kids what they ask for and hope that they are loved for their accommodating style.

Other Permissive parents want to compensate for what they themselves lacked as children. Perhaps they grew up in poverty and/or had parents who were overly strict. So as a result, seeing themselves as an ally to their child, these parents bend over backwards to give the child both the freedom and the material goods they lacked. Yet other Permissive parents act conditionally. They view the maturing child as a mini-adult and give him or her what he or she wants, provided the child satisfies certain parental demands. Making good grades, for example, may be linked to freedom and material benefits.

Or, at its most lax extreme, permissiveness may take the form of indifference. The parents are just too busy, poor, troubled, or self-involved to exert much control. They may give material goods and freedom in return for the child’s implicit promise not to demand much from the parent.

The uninvolved parent demands almost nothing and gives almost nothing in return, except near-absolute freedom. This style is low in both demandingness and responsiveness. At its worst, it can verge into neglect.

How would these parenting styles work in practice? For example, a teen wants to go with a bunch of friends on a weekend outing to Mexico where, the parent suspects, wild partying is on the agenda because of younger drinking-age requirements there:

Parenting style has been found to predict child well-being in a number of areas, including social skills, academic performance, and the degree of problem behavior. The Authoritarian, Permissive, and Uninvolved styles can carry a high cost:

Authoritative parenting, which balances clear, high parental demands with emotional responsiveness and recognition of the child’s need for autonomy, is one of the most consistent predictors of social competence. Thus, the child of Authoritative parents typically does well in school, develops good social skills, and avoids problem behaviors.

Studies show that the benefits of Authoritative parenting and the disadvantages of Uninvolved parenting are evident as early as the preschool years and continue throughout adolescence and into early adulthood. A recent study of 1,000 teens, for instance, by the National Center on Addiction and Substance Abuse evaluated a “hands-on” (roughly equivalent to the Authoritarian or Authoritative styles) approach versus a “hands-off ” (akin to the Permissive or Uninvolved styles) approach to parenting and found that teens living with “hands-on” parents are at only 25% of the risk for drug abuse than those living in “hands-off ” households. Similarly, 47% of teens in “hands-on” households reported having an excellent relationship with their fathers and 57% an excellent relationship with their mothers. By contrast, 13% of teens with “hands-off” parents reported an excellent relationship with their fathers and 24% with their mothers.

“Moms and dads should be parents to their children, not pals,” said Joseph Califano Jr., former Secretary of Health, Education, and Welfare, in summing up the study. “Mothers and fathers who are parents rather than pals can greatly reduce the risk of children smoking, drinking, and using drugs.”

Editor’s Note: Attachment Parenting International advocates a certain approach to parenting in order to develop close, healthy emotional bonds between the parent and child, and this looks different in different families, but it is ideal for attached families to strive toward the science-backed Authoritative parenting style.

20 thoughts on “The 4 Parenting Styles: What Works and What Doesn’t”