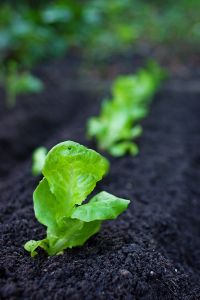 Georgia Jones isn’t accustomed to addressing a crowd as knowledgeable about food as are many attached parents. An University of Nebraska-Lincoln nutrition professor, Jones spends much of her classroom time educating people about the very basics of what they put in their bodies.

“My students don’t come with an understanding of food,” she said. “Food for my students comes out of a box, a pan. If I told my students to go make a chocolate cake, they wouldn’t have a clue.”

But many families involved in Attachment Parenting are smart about their food. They understand the importance of knowing where their food comes from and how it was produced. These consumers choose to eat food without chemicals, because they realize that organic is superior to conventionally raised food. Or, is it?

Background on the Organic Food Industry

Organic food, a $14 billion industry, is the fastest-growing segment of the food industry, Jones said. National surveys show that two-thirds of Americans have purchased organic food at some point during the last 12 months.

“Organic food started as mostly a niche market, years ago,” Jones said. During especially the last decade, organic foods, farmers markets, and local food networks have spread rapidly into the mainstream consumer market. “Organic food is no longer a niche market,” she said.

Consumer demand for organic food is on the rise for a number of reasons, including food safety issues, such as an avoidance of pesticides and genetically modified organisms (GMOs); a concern for the environment; and because organic food is often fresher and tastier than conventionally grown food, Jones said. But the number-one reason is an increased awareness of the link between food and health.

“There was a time in this country when we forgot that food actually has a purpose in our health, that it is for nourishment,” Jones said. “Now, we’ve moved into an area that I call ‘beyond nutritional eating,’ where we are using food to try to prevent and heal disease.”

That organic food is free of pesticides and GMOs and comes from environmentally friendly farms and gardens are safe assumptions – each documented through federally regulated certification programs. Shocking as it may be, however, there is no certainty that organic food, while its safety is certainly more accountable, is actually more nutritious than conventionally grown food, Jones said.

A New Era in Food Science

Consumers often confuse food safety and nutrition. Food-borne illnesses, pesticides, and GMO allergens are food safety concerns. Nutrition refers specifically to the content of macro- and micronutrients within food. Traditional nutrition centers on macronutrients, which include protein, carbohydrates, and fats; vitamins; and minerals. Micronutrients include substances such as phytochemicals and phytonutrients that were long thought to have no effect on human health. Research now shows that these micronutrients, also known as secondary metabolites, are extremely beneficial in boosting the immune system, protecting the body from cancer-causing free radicals, killing disease-causing pathogens, and more. “This is a new area [for science],” Jones said.

One phytonutrient receiving a lot of attention from nutritionists are flavonoids, which are found in very high amounts in blueberries but also in a variety of colorful fruits and vegetables. Flavonoids are known to protect against heart disease, cancer, and age-related diseases such as dementia. “You want to eat plenty of fruits and plenty of vegetables,” Jones said. “Something else is, you want to eat plenty of color. This is a key part of nutrition and is not getting enough attention.”

Activated by environmental stress, flavonoids are produced by the plant as a defense mechanism against UV-B radiation and disease stress. “These secondary metabolites aren’t there for us. We just reap the benefits,” Jones said. “They’re actually there to protect the plant.”

But Theories Are Not Proof

Although organic foods do tend to contain more secondary metabolites, “there are a number of reasons why scientists aren’t coming out and saying this is the better way,” Jones said. There are still too many unknowns in the formation of secondary metabolites, including specific environmental factors, soil properties, and crop management practices that affect the formation of these micronutrients. Plus, there are two crucial questions that must be answered first:

Much of the problem with being unable to give a definite answer to the question of whether organic food is more nutrition relates to the type of research that has been conducted on the relationship between secondary metabolites and organically raised food. Most of the studies seek out theories, such as epidemiological studies that link food to health through statistics, retail food analysis, and other studies that are purely observational. Observational studies look for patterns, but they can’t prove a theory. For example, an observational study may find that people who eat oranges tend not to develop cancer but there aren’t any scientific data to prove that oranges prevent cancer. “Just because something organic is statistically different doesn’t mean it’s biologically different,” Jones said.

Below are a number of observational studies related to organic nutrition, each with promising theories:

A follow-up human or animal study must be used to prove any theories found. Human studies are the most influential but are particularly difficult to do. “You can control what a rat does, but you can’t control what a human does,” Jones said. “You have to consider not only diet but lifestyle. You can’t eat organic and drink or smoke all day. … You also have to consider, with human studies, that diseases progress over a lifespan, not just one or two years.”

The Most Promising Study

By and large, the observational study most supportive of the theory that organic food is nutritionally superior to conventional foods was conducted in 2001 among Okinawans, the people living on the southern-most Japanese island of Okinawa.

“They have the longest lifespan of any group alive,” Jones said. Okinawans live to be an average of 81.2 years old, followed by the Japanese at 79.9 years, Hong Kong at 79.1 years, and Sweden at 79.0 years. The United States has the 18th longest lifespan of the world’s societies, at 76.8 years.

Okinawans also experience a delayed aging process and minimized debilitating diseases in the elder years. “These people are healthier longer than (Americans) are,” Jones said, despite U.S. medical advancements superior to that of the Okinawans. The average cholesterol level in the Okinawa centenarian is 102.4 mg/dL, and high blood pressure exists in only 1.5% of the centenarian population, she said.

There are several aspects of the Okinawan diet that differ dramatically from the Western diet. Okinawans have never developed a taste for salt, so “they don’t eat a lot of processed foods,” Jones said. Their flavonoid consumption is six times higher than the Japanese or Canadians, who are next on the list. And the Okinawan diet contains the highest lycopene content of all of the world’s diets. The Okinawan diet has since been called the Longevity Diet, because it improves physical strength, prevents illness, and maintains overall health.

“They look at medicine as food,” Jones said. “They’re really looking at food in a different manner than we do.”

Using the Okinawan study, consumers of organic foods can safely assume that, yes, organic is nutritionally superior to conventional foods, Jones said. But, she warned, this is only a guess until the research proves it so — although it’s a guess that many consumers are confident to say is truth.

Current Trends in the Organic Sector

Consumer interest in organic foods continued to grow last year. Highlights from 2008 consumer use surveys include: