By Larissa Dann, Australia’s parenting editor for The Attached Family 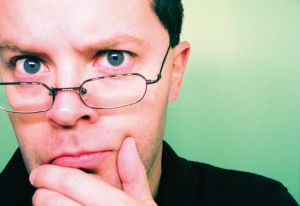 I was 31 years old. In my arms, I held another life. He was warm, pliable and soft, caked in afterbirth, and seemed breakable. He had huge blue eyes and now he relied on me. Such a huge realization: I had to grow up now as I was largely responsible for meeting all his needs – his nutrition, his physical and emotional needs, his safe passage through life.

I was also, overwhelmingly, in love.

There was, I realized, a dilemma for me. In my entire life, I think I had only ever held one baby. I did not know how to change nappies or what to do when he cried. All I had to guide me through this parenting jungle was the dimly remembered and experienced way I was brought up.

That way meant lots of affection. It also meant lots of smacking — at least once every six months because, as I recall my mother saying, we just needed that spank to get us back in line.

When my son was eight months old, he bit me during an exuberant breastfeeding session. I did not know what to do: I thought the only tool at my disposal was to punish him, so I tapped him lightly on the foot. I still remember how he pulled off the breast straight away, and looked at me, his round eyes totally puzzled. I was lost: This did not feel good. What else could I do?

Putting the Relationship Back into Parenting

Serendipitously, around that time, a friend asked if I’d like to take her place at a parenting course called Parent Effectiveness Training (P.E.T.) that teaches a relationship — and, I now believe, an attachment — approach to parenting. I had no idea what it would entail — I just knew I needed all the tips I could find on this new journey.

The course was life changing for me. I learned that children were people! I learned they deserved respect, but the most mind-blowing and challenging tenet of this approach to parenting was that I could eschew the use of rewards and punishment.

Wow!  This was big! All my assumptions about being a “good” parent, which was based a lot on my experience of being parented — that was all being questioned and, ultimately, thrown out the window. Now, my guide to being a parent was about building a relationship with my child, not trying to control him. This was a fundamental shift in the foundations I had been preparing for parenting.

Could I do it? Could I really bring up a considerate, caring child in today’s world, without bringing him into line using the old carrot and stick? Wouldn’t he end up spoiled and self-centred? I proudly told my mother of my plans, and excitedly described all the new skills and philosophy I had just learned.  She listened, skeptically.

A week or so later, my mother relayed a story and advice from her golfing friends. She had told them I was planning to bring up my son without smacking him. They all laughed, saying I would soon find out that was impossible. I bowed my head, more determined than ever. I was going to do this, and my son would benefit!

I was influenced to take change my attitude toward parenting by authors such as Thomas Gordon who wrote Parent Effectiveness Training and Teaching Children Self Discipline, and Louise Porter who wrote Children are People, Too. These authors demonstrated a strong case against using rewards or punishment. Daniel Goleman’s Emotional Intelligence further cemented my resolve to rely on relationship skills.

Change Begins with a New View of Children

And so, this journey through positive parenting began. How was I going to avoid using praise, or star charts, or stickers? What would I do when I couldn’t put my child in timeout, count to three, plan a consequence for his actions, or be able to smack him?

I was helped by an underlying ethos from my parent training — that children do not “misbehave.” Instead, they behave simply to meet a need. If I could understand that need, rather than blame my child or see him as deliberately wanting to “get at” me, then I might find it easier to respond to him, rather than punish him.

The Trial of the Toddler Years

Soon, we came to the toddler years. How could I entice him to use the toilet without reward? How could I stop him drawing on the fridge without some consequence? And surely he was too young to understand my verbal communication, and I would need to smack him or put him in timeout?

Somehow, I managed. I did not use timeout or rewards. Instead, I used the relationship skills I’d been taught, with the core belief that he was not being “naughty” or “bad” but simply being a child with unmet needs. I was also guided by the incentive to develop emotional and social intelligence in my son, for him to become empathic and considerate.

Having emerged relatively unscathed through the toddler years, I decided I wanted to teach this style of parenting. One motivation was that teaching the skills would help keep me on track with using the skills personally. I have now been teaching P.E.T. for more than 13 years and love it!

Parenting in this way has resulted in some interesting judgements by family and friends. I have been seen as “giving in” to my children, because I don’t insist they do everything my way. “You let him win that time!” is a never-forgotten comment by my grandmother. My take on those same  situations, however, has been to see the outcome as a win-win for both my child and myself.

Being a teacher of parenting has it’s own social issues. I was once meeting my cousin and her friend who had been a student in the course. The ex-student was reticent with me and later told me that she had warned her children to behave as they were going to be seeing the parenting teacher! In my eyes, I’m just a mum, who happens to have taken a certain path.

It hasn’t all been smooth sailing. I am no perfect mother — just ask my children! They will happily fill you in on where I could do better. I make heaps of mistakes, but I forgive myself because I am human and then apologize — a lot! And I continue to delight in my children.

My son is now a teenager, and I am thoroughly enjoying walking beside him as he negotiates this difficult stage in life. I am excited by who he is becoming and I value our relationship every day. I have not grounded him and he is aware that this is not an option for me.

My younger child is another delight, and I marvel at her sparkle every minute I am with her. We have our moments, as does any relationship, but our attachment bond is strong. I hope that her entry and movement through adolescence is as exciting and wondrous for us both, as the journey her brother is taking.

Recently, my mother complimented me.  She acknowledged that she thought it would be impossible to bring up children without physical punishment. Now, when she looks at my children, she sees that it is possible.

For me, taking this approach to parenting seems to be fulfilling my goals as a parent. It may not be everyone’s cup of tea. I just wanted to share that choosing to parent in this fashion — relying on relationship rather than behavior management — is possible…if you trust yourself, your children, and your motivation.

2 thoughts on “Parenting without Punishment or Reward…Really?”