By Sonya Fehér, contributing editor for the API Speaks blog, leader for API of South Austin, Texas, USA, and blogger at www.mamatrue.com 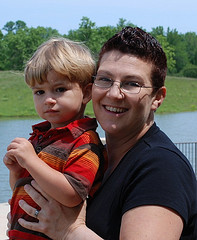 How many of us arrived at Attachment Parenting because we wanted to parent differently than we were parented? I have had the (mis)fortune recently of witnessing exactly how I was parented. First my mom came to visit, then my dad. It’s hard to get the distance to observe our relationship objectively, but watching each of them with my son was illuminating.

First was my mother’s inability to say no. While I am certainly not interested in the “no” that frequently is an automatic reaction in parenting, what gentle discipline means to me is that it is my responsibility to help my son by setting appropriate limits. Parental guidance means he doesn’t have to figure out what is okay or safe on his own.

We had gone out for lunch at an Indian restaurant, and my son had a mango lassi. Running errands afterward, I was going into one store while Gramma and Cavanaugh went to another. I told my mom that Cavanaugh couldn’t have chocolate milk because he already had a treat. So what did she do? She told Cavanaugh that the bookstore café was out of chocolate milk. Ultimately, the result was the same. Cavanaugh did not drink chocolate milk. But he also wasn’t given the boundary that two treats were too many. What my mom avoided by lying to him was the responsibility of saying no and having to answer his objections to that no.

I grew up with her lack of ability to set a clear boundary. It didn’t mean that I got everything I wanted. Instead, I often felt frustrated that I wasn’t getting what I wanted, but I didn’t really understand why I felt angry, sad, or disappointed. After all, no one had actually said no.

Later that day, I did say no to Cavanaugh when he was standing precariously on my rolling desk chair, leaning over my paper-covered desk. I explained I was afraid he would fall, because the papers or chair could slip. He cried. I understood the tears. He wanted something and wasn’t getting it. I held him in my arms and said, “I understand you feel sad. You really wanted to play on my desk.”

That gave him the room to talk about how he was feeling. “I wanted to close the printer.”

“And what would you say?”

“I would say, ‘Okay, let me hold the chair steady while you do that, then you’ll have to get down because it’s too messy up there and it isn’t safe.’”

In the middle of this exchange, my mom came in, saw Cavanaugh crying, and attempted to distract him from his tears. I motioned for her to leave so he and I could finish talking. In that instant, I remembered just how often my feelings were denied. The message was: Don’t feel sad even when something sad is happening. Stuff those feelings, act happy, or distract yourself.

Having not heard no as a child or learned how to deal with direct boundary setting has affected me in school, jobs, my marriage, friendships, anywhere with authority, or just dealing with other human beings.

The same is true for the direct expression of my feelings. Knowing what I even feel, much less how to express those feelings, in an appropriate way or in particular settings is something I am still having to teach myself.

This is just one example of why Attachment Parenting is such an important practice for me. I want to honor my son’s feelings and experience by letting him have the feelings. It’s important to give him the room to express what’s going on with him. Gentle discipline gives me a way to accomplish that because I still set limits, but I do it consciously and kindly. I do it while respecting that he is a human being with needs and wants that will not always be in alignment with mine.

During my dad’s visit, just about every message he gave about my parenting was that it was too permissive and too attentive. I heard over and over, “He’s going to have to learn he just can’t have attention all the time.” So if I just give him less of what he needs or wants, then he’ll want it less? I don’t think so.

When Cavanaugh — who is only three years old by the way — interrupted because he was tired of the adults talking instead of giving him attention, my dad taught Cavanaugh to say, “Excuse me,” and then expected that my son would sit and wait patiently while his Granpa went on for another ten minutes.

Throughout Dad’s entire visit, I felt anxious because I couldn’t begin to anticipate what might come up as the next challenge, and the only limits I could think of setting were:

Besides pointing out the contrasts in our parenting styles, Gramma and Granpa’s visits have presented me with a challenge. Neither of my parents see my son that frequently, so how much should the messages they’re giving him concern me? What total impact are they having? I am aware that I can’t change their behavior. Believe me, I spent years trying.

Rather than trying to change my parents, the next plausible option is to talk directly to my son. Whether Granpa is giving an “Excuse me” lesson or Gramma is trying to distract from the no, what I chose to do was speak to Cavanaugh. “I know it’s hard to not get what you want” or “It’s polite not to interrupt people while they’re talking, and I know you’re ready for some attention.” Ultimately, my responsibility is to parent my son, not my parents.

Still, this dealing with grandparents feels like one of the trickiest issues I come up against in parenting. My instincts work much better with my son than with my parents. I’m still figuring out how to navigate the Grandparent Challenge? How do you handle it? Click here to share your comments about the AP-unfriendly adults in your life…

13 thoughts on “The Grandparent Challenge”