By Laurie A. Couture, author of Instead of Medicating and Punishing 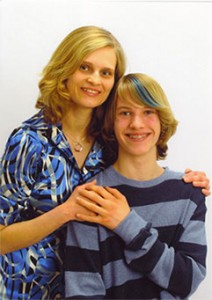 So many attachment parents start out so passionate about giving very young children the best start possible in life: Moms birth naturally, spare their sons the trauma of circumcision by keeping them intact, breastfeed for at least three years or longer, carry their babies at all times, cosleep for several years, and they ideally are gentle and nurturing to their young ones as the children begin to assert their wants and express upset emotions.

Sadly, however, something happens between the ages of seven and 12 in far too many families who started out as attachment-minded: Moms and dads stop parenting for attachment and connection and start letting the mainstream lifestyle creep in. This often translates into sending children to school to suffer with all of its toxic elements, passively allowing children to become saturated and enslaved by the media, consumerism, pop culture and peer culture. And most tragically, moms pull away emotionally and physically from their older children.

If children as young as seven to 12 years old are being slowly absorbed into the mainstream cultural ideals of consuming and “individuating,” where does that leave our teenaged children? Very lost and disconnected, for sure!

Even in the Attachment Parenting (AP) community, writings about adolescent children have a negative and anti-attachment twinge to them: Most writings about parenting teens advise that teens should be  “individuating” from their parents and parents should be “pulling back” and “letting go” of their adolescent children. Due to years of “letting go,” parents of teens seem to passively assume that the disconnected behavior of their teens is “natural” and they oblige: They pull away and let go of their child even more.

My beautiful 17-year-old son Brycen is a free-spirited, self-directed child who revels in the freedom of unschooling. His expression of his individualism is unique, evolving and all his own creation. He is busy with endless creative pursuits, music, community activities, and flexible work of his choosing. He can sometimes be gone for days with back-to-back plans with friends. He knows that if he wanted to travel, or manifest an opportunity in his life, I would stand behind him in doing it. Brycen is truly a free child!

The most important essence of his life, however, is that he and I are deeply and closely connected. The parent-child attachment security and his needs are just as much my priority now as they were when he was little. Physically, emotionally, spiritually, and creatively, I have not “backed off,” “stepped back,” or “let go.” I have not relaxed my protection of him, diluted my delight in him, or weakened my nurturance of him. Instead, as if he was little, I have remained a loving, nurturing, affectionate, compassionate, protecting, delighted, supportive, and passionate mom to my son throughout his adolescence. In doing so, I have set him free to grow holistically.

What is your emotional reaction to this? Do you feel happiness, warmth, and a sense of bliss? Or do you feel uncomfortable, anxious or defensive — a desire to  give me your contrary opinion?

Our society seems to feel very uncomfortable about parent-teen closeness, especially mom and son closeness. These are deep cultural wounds in the collective unconscious that continue to be part of our culture. Tragically, as a result of this harmful emotionally charged bias, boys are often cast off physically and emotionally by their moms by their eighth or ninth year of life — a decade before they can handle such a disconnect! Teens who are disconnected from their parents are often stuck in a dynamic with their parents of push and pull, love and hate, compliance and rebellion, clinginess and aggression, being controlled and being pushed away.

Let’s return to nature for a moment: Nature’s intent is the only parenting advice we truly need. Our parenting challenges, concerns, and choices can become so simple if we consider, “What is nature’s intent for a child’s holistic development?” Nature is our reference manual, our guide to mammalian and human needs.

Our closest mammalian relative, a primate called the bonobo, is a great example of mother-adolescent relationships in the wild. In bonobos, the mother is intensely affectionate to her young well into adolescence. The daughter stays with the mother for seven years, at which time she leaves her mother and joins a neighboring tribe of bonobos. The son, however, remains dependent upon his mother for ten years and, as an adult, will be joined by his mate to live with his mother for life.

What about humans? In the Yequana tribe of South America, documented by the late Jean Liedloff in The Continuum Concept, adolescents and young adults remain interdependent with their parents until they marry. There is no teenage rebellion, no “individuating,” no mutual disrespect, no parental pushing away, no “letting go,” no “backing off,” and no “casting out of the nest,” even once the teen reaches adulthood. In fact, if an unmarried young adult’s parents pass away, another family in the tribe will “adopt” the young adult into their family until that adult marries. Parent-child affection, physical nurturance (especially during a time of injury or illness), support, and protection continues in many peaceful, nonviolent tribal societies well into young adulthood, until the adult child marries.

But what about the American mainstream cultural phenomenon of “helicopter parenting” happening to Generation-Y and the Millennials? Isn’t Attachment Parenting adolescents akin to Helicopter Parenting? No doubt, people’s fear of the unhealthy parent-child clinginess of Helicopter Parenting is what incites cultural backlash that is even more harmful. The imfamous Tiger Mother method, a new label on the old problem of child maltreatment, is one example (which ironically is opposite of how real tigers parent their young).

Both Helicopter Parenting and the Tiger Mother method are examples of parenting that is grossly contrary to nature’s intent for children. The children of families that interact in this manner are disconnected and insecurely attached. Such youth are all dependent upon their parents in an unhealthy manner, begging to get basic needs met that have never been met. These ways of raising children are stifling, suffocating, mentally crippling, and in the case of children treated harshly, traumatizing. Children parented in these ways will grow up incompletely, to be holistically wounded, unfulfilled, distressed, empty, and stunted. In both of these extremes, children are not allowed to live and learn in freedom and in joy. Their holistic needs are not met and their passions are not guided and nurtured. In these cases, parents live their children’s lives for them, controlling them every step of the way, giving them only a mirage of a relationship and of a life that evaporates when touched. This is not nature’s intent for children. This is youth maltreatment.

Attachment Parenting our teens means keeping the parent-child connection and attachment secure and strong throughout childhood from birth until adulthood. The behavior and emotional stability of our teens will reflect the quality of this attachment. Attachment Parenting our teens means remaining physically and emotionally affectionate and nurturing, available, compassionate, and sensitive. It means allowing them to unschool to keep them free of the toxic, stressful environments of school. It means allowing your teens to direct their own lives, learning, healthy interests, and passions while you support these endeavors as passionately as you did when they were much younger.

Attachment Parenting means listening to your teens everyday and getting excited about what they are excited about. It means talking openly and honestly with them about things they want to know such as puberty,  masturbation, sex, sexual orientation issues, moral principles, social justice, world events, life and death, philosophy, and spirituality. It means treating teens with respect, dignity, humanity, and care — not speaking to them with sarcasm, cynicism, irritation, and disgust. It means understanding the incredible hormonal changes happening to your children that might mean they appear less responsible or helpful than when they were younger: Be sensitive to and celebratory with them of the amazing metamorphosis their bodies and brains are experiencing! It means protecting them online and in the community from sexually explicit media, predatory adults (men and women), drug addictions, media addictions, and sexually dangerous situations through dialogue, discussion, and honesty about your feelings and principles.

Attachment Parenting means allowing your teen children to unfold as they are, not what you wish for them to be. It means letting go of controlling them but not letting go of nurturing them. It means guiding them in life and cultivating a loving, peaceful, and interdependent relationship with them, where they feel free to branch out, return, branch out again, return, and fly when they are ready. It means holding them in an embrace of unconditional love and emotional support — an attachment bond that will last a lifetime!

27 thoughts on “Attachment Parenting Our Teens”