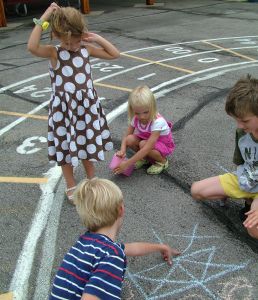 I am quite happy with the preschool that my children attended, although it took a lot of interviewing teachers and visiting sites, and a bit of trial-and-error, to find a program that I agree with. And now that my daughter is entering Kindergarten, I wonder if we will begin the process of finding an appropriate, like-minded school all over again?

A major concern of mine about organized school programs outside the home is the lack of child-led play offered. The preschool programs that I turned down for my children were focused so narrowly on teaching reading, writing, and math for “school preparation” that they missed the best learning opportunities provided by a child’s natural inclination to explore. Preschoolers are wired to learn through play, not through deskwork.

Nicole Polifka, MEd, Head of Early Childhood Professional Development at the Minnesota Children’s Museum in Saint Paul, Minnesota, USA, shares my concern, adding that even childcare programs designed for infants and toddlers are increasingly becoming more geared toward academic testing and orienting away from free play.

“Play is very complex,” Polifka explained. “A very big difference between promoting intelligence in a child and just promoting academics: With the latter, there is a lot more they need to learn.”

Teachers tend to view play and learning as opposing forces when in fact they are synonymous for children, she said: “Play and learning are partners, not competitors. Learning is a whole-body experience. Learning by doing creates a ton of positive things for the brain.”

This theory was developed by American sociologist Mildred Parten in 1932. While children often go through the play stages according to developmental stage, it is not unusual for children to flit in and out of the first four stages. Once children reach the cooperative play stage, usually by five years old, they may continue to visit the other stages but prefer cooperative play.

Polifka explained that there are two types of play, both of which are important to child development in their own rite:

Whether child- or adult-led, play creates connections in the brain, sharpening both existent and emerging skills. Play is well-researched and consistently shown to nourish the whole child – cognitive, physical, social, and emotional. Furthermore, by utilizing creative thinking and imagination, play establishes a positive disposition toward learning – which should be the primary purpose of preschool programs, Polifka said. In addition, play promotes the development of underlying self-regulation skills such as persistence, risk-taking, and acceptance of others.

As much as the traditional 3 Rs – reading, writing, and ‘rithmetic – were valued in the 20th Century as indicators of future career success, these academic skills are no longer enough to keep employees competitive in the workplace. In addition to the 3 Rs, according to a 2010 American Management Association survey, future employees – today’s children – will be expected to enter the workforce also possessing the 4 Cs:

Both free play and guided play are useful in developing these skills in a child, but there are ways to specifically encourage creativity during play:

Especially with infants and toddlers, younger children often like to play the same games over and over. While introducing children to a diversity of activities broadens their experiences, there is something to be said for the same activity. By participating in the same activity over and over again, the child is actually building his skills and will eventually master the activity. Even once self-mastery is accomplished, the child may like to play the activity again and again to reinforce the skill.

It depends on each child’s unique temperament and natural talents as to how quickly to introduce new play activities. Some children are excited by change; others are easily upset. While it’s good to challenge your child, it’s not recommended to overwhelm her. If your child is easily upset, transition slowly and gently.

(As an aside, sharing typically isn’t mastered until at least five years old.)

Most preschool programs provide ample guided-play opportunities; these are any activities where an adult is guiding the exploration and play. But free play opportunities are just as important – free play specifically inspires creative thinking. There are ways that an adult, without leading the interaction, can enhance the child-led activities, Polifka said. Keep these guidelines in mind when creating an environment for free play:

Even though playful learning should never look like deskwork, this doesn’t mean that academics can’t be introduced. Here are examples of how literacy, math, and science can be incorporated into everyday activities to make a playful experience:

Play can easily become a central theme in a preschool program where testing scores aren’t a requirement, but what about school-age programs where children must meet certain academic standards? It’s true that deskwork is inherent to most schooling programs for elementary-age children through teenagers, but Polifka said there are ways of better balancing deskwork with the need for play and exploration. Many programs use such strategies as:

Many parents consider organized sports as the play activity needed by older children and teenagers – and it can be, but it depends on the experience. The coach’s attitude and approach is important – posing challenge is OK, but unrelieved stress and pressure is not.

Sports would be considered guided play. They teach important skills, but free play shouldn’t be discouraged, Polifka said. “Sports isn’t that child-driven, natural, curiosity-involved type of play, so if your child is watching an airplane during the game, don’t discourage that.”