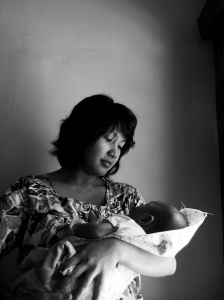 The quality of love a mother gives during her child’s first years of life has a tremendous and long-term impact on that youngster. A life that could be described as emotionally healthy, happy, harmonious, constructive, and productive depends on the quality of maternal love received at an early age. This is a fact well known by psychologists.

Unfortunately, however, many parents remain unaware of the importance of maternal love for the very young child. Nor are they aware of the problems that can result during childhood and adolescence if an infant does not form a proper early attachment.

Here, we look at what Attachment Theory (Ainsworth 1978; Bowlby 1969) tells us about the importance of early relationships for the development of an individual’s basic sense of security in life. By “attachment,” we mean the relationship formed between the infant and the primary caregiver. The “primary caregiver” is the person, usually the mother, with whom the infant most frequently interacts. Through bonding with this caregiver, a child develops expectations about the extent to which he or she can acquire and maintain secure relationships, as well as beliefs about others’ trustworthiness in relationships.

Secure attachment is also created when the mother holds or cuddles her infant and toddler in ways that are comforting. The mother reflects the infant’s behaviors and responds in ways the child enjoys. For example, when the baby smiles, the mother smiles at the infant. The infant shows pleasure and interest in the mother’s smile.

The mother who fosters secure attachment is in tune with her child. An ongoing, interactive harmony develops as the mother learns to understand, interpret, and then appropriately react to the child’s behavior. She successfully communicates to her youngster that the child’s behavior is respected, interesting, and significant to her. For example, when an infant babbles, makes sounds or syllables, or begins to talk, the mother notices these new verbal abilities and responds in ways that lets the toddler feel valued. The acquisition of speech is greatly facilitated when a mother holds, smiles at, and talks to her infant (Bus & van Ijzendoorn, 1988).

Infants and toddlers love to explore and play. Mothers who wish to foster security in a young child provide toys and activities in which the child expresses interest. Because infants, toddlers, and preschoolers enjoy making choices, parents who want their child to feel secure provide opportunities to make choices throughout the day. These mothers also allow the amount of playtime the youngster wants. Without interrupting, they allow the child to focus on an activity the child finds interesting and do not distract the child until he or she becomes bored with that activity.

Mothers desirous of having their child form a secure bond with them also evaluate their own childrearing behaviors. They do this by paying attention to the child’s reactions to them. If at any point the child becomes distressed or acts out or displays insecure behavior, the mother does not blame the child. Rather, the mother looks to her own behavior and adjusts it to provide greater security and unconditional love.

The childrearing behaviors described here allow an infant or toddler to feel secure. These behaviors also build a foundation of social harmony between child and mother. The child enjoys being with the mother, and the mother enjoys being with the child. The way an infant reacts to the mother reveals whether the child feels his or her needs have been met in ways that are pleasing. Contrary to popular belief, this kind of parenting will not spoil a child. In fact, spoiled, dependent, misbehaving, and demanding children are created when parents consistently violate these childrearing practices.

When maternal love is not consistently forthcoming, an infant develops an insecure attachment. In this case, the bonding with his primary caregiver is incomplete and unsatisfactory. For example, when the infant cries or shows distress or expresses a need, the mother does not respond, or only responds after a significant delay. The mother may act in loud, abrupt, or exaggerated ways that scare the youngster and cause insecurity. The mother does not spend time holding and cuddling her infant or child. She does not regularly play with, talk to, or exchange smiles with the child. Instead, the mother may attempt to impose her own interests on the child, such as by providing toys and activities of her own choosing. In general, none of the intimate behaviors that occur during secure bonding happen, or these behaviors happen so infrequently that they are not noticed by the child.

As a result, the child becomes frustrated because his or her needs are not being met responsively. The child begins to expect that this will happen whenever a need arises. Thus, the child fails to develop trust in adults and in himself or herself. In short, the child becomes insecure rather than secure.

Many undesirable outcomes can occur when a child forms an insecure attachment. Youngsters who experience insecure attachments at home also form insecure attachments with their preschool, kindergarten, and first-grade teachers. These teachers often have difficulty building a relationship with these young students because these children harbor negative views of adults. The children are not trusting of their teachers and may act out in class. In turn, it is difficult therefore for teachers to learn about these children’s needs and to respond to them in a manner that helps them learn and adjust (Bowlby 1988).

Effects of Secure and Insecure Attachment

The type of emotional attachment established during the first four or five years usually lasts a lifetime. The pattern of early attachment significantly influences the quality of love relationship an individual will have as a teenager, adult, and even as a parent with his or her own children. Let’s summarize what research has concluded about the effects of secure and insecure attachment:

According to Attachment Theory, the most essential task of the first years of life is the creation of a child’s secure bond to the mother. Many studies have demonstrated this by examining the interactions of mother and child and by contrasting the long-term behavioral outcomes of securely and insecurely attached children. More recently, research has shown that the type of attachment formed during infancy affects right brain development (Schore 2002). In fact, this biologic foundation can last a lifetime.

Lieberman, M., Doyle, A. B., & Markiewicz, D. (1999). Developmental patterns in security of attachment to mother and father in late childhood and early adolescence: Associations with peer relations. Child Development, 70, 202–213.

Schore, A. N. (2002). Dysregulation of the right brain: A fundamental mechanism of traumatic attachment and the psychopathogenesis of posttraumatic stress disorder. Australian and New Zealand Journal of Psychiatry, 36, 9–30.

Suess, G., Grossman, K. E., & Sroufe, L. A. (1992). Effects of infant attachment to mother and father on quality of adaptation in preschool: From dyadic to individual organization of self. International Journal of Behavioral Development, 15, 43–65.

14 thoughts on “Why Early Attachment Matters for Childhood, and Beyond”