I was horrified to discover the [2010] media attention given to the findings of Prof. Marjorie Gunnoe’s small, twice-rejected-by-peer-reviewed-journals, study on the positive value of spanking children. It gives an extremely bad message to many desperate parents of troubled kids who are stumbling around trying to find the best methods of discipline in dealing with them. Moreover, there is a mountain of data flatly refuting her claims that can be found in thousands of carefully planned and executed studies on the relationship between spanking and later aggressive behavior. Why the media would spotlight this shabby piece of research is beyond me.

Parents of angry, troubled kids are already confused and frustrated with these youngsters. They don’t need this kind of “scientific” support in justifying their strong desire to throttle a kid who is giving them grief. Just this week, I evaluated an angry 15-year-old youth in detention who was being constantly suspended from school for fights and insubordination, and was heavily into marijuana. He admitted he was full of anger, but did not know why, but indicated that his mother frequently use to beat him with a large wooden spoon. During an interview with the mother, she admitted it, laughingly commenting, “I even broke a number of spoons on him, but it just didn’t do any good.” His father was in full support of the discipline, explaining, “We were never as rough on our son as my parents. I was hit with belts, extension cords, and shoes, and whatever my parents could pick up.” They both attributed their son’s delinquency to his ADHD and bad friends, and were looking for a military school in which to place him, as if he hadn’t been exposed to enough authoritarian rule already. 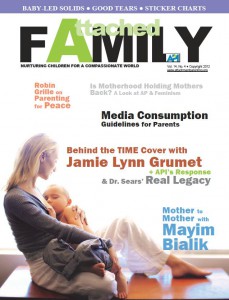 Check out the next edition of Attached Family, Attachment Parenting International’s magazine, coming out in the next few weeks. Inside, you’ll receive guidelines to your own media consumption to help you discern what’s real and what’s bogus in terms of parenting advice and studies. You’ll also read about:

During my many years evaluating juvenile delinquents (now numbering in the thousands, and still climbing as a Court Based Assessment Psychologist), I have yet to see the first violent male juvenile delinquent who wasn’t raised on a belt, board, extension cord, fist, or the equivalent. I have carefully excluded all forms of discipline that were incapable of causing lasting physical marks or damage including hand slaps, hands to the rear, and even a switch to the legs. I fully realize that the vast majority of Americans were spanked as kids. However, I am still amazed at the consistency of the “belt” and its equivalents in producing angry and violent behavior. Ordinary spanking appears to be a benign activity in and of itself, but parents of troubled children don’t seem to remain at a spanking level.

A number of years ago, I told the probation officers at the Danbury, Connecticut, USA, juvenile court that I would give them $100 if they would refer me an aggressive, male juvenile delinquent who had not been raised on “the belt.” However, if they sent me a false positive (a kid they thought had not been beaten on a regular basis, but actually had a history of physical abuse they had not found), they had to pay me $1. It seemed a bet too hard to turn down. After losing close to $20, they all backed out of the contest.

Here are some unusual findings from my years of research:

In short, all of the data suggests that corporal punishment as a disciplinary technique is very dangerous, is the major contributor to our crime worldwide, and tends to perpetuate itself.

Spanking kids does not deter behavior. Like beating a dog, it just makes them mean. What we know about punishment from animal research and human research is this:

Physical punishment discourages learning and encourages retaliation toward the parent and society in general, because the abused person often rejects the societal values of the punishing parent. It produces behavioral variability since it does not identify the “desired” behaviors, so it rarely produces the behavior the punisher is looking for. It exhibits a delayed-action effect since the aggressive behavior follows the cause–the spankings–at some time in the future, so its effects are not readily connected by the casual observer.

Physical punishment generalizes and focuses the abused child’s aggression on other elements associated with the abuse, such as school, homework, and parental rules that usually are the basis of the punishment. It forces allegiance to counter-cultural forces in the community, such as “bad friends,” taboo websites, and anti-social activities. Beaten kids hate all authority, including teachers, the police, and all too often, their parents.

Hyperactive children are prime targets of abuse. The correlation between ADHD and delinquency is essentially due to the fact that these children invite punishment and are therefore often over-punished. Also, most siblings of delinquents are good students, model citizens, and essentially conformists. When interviewed, they all admit that their delinquent sibling was the one who received all of the spankings because he/she was the “bad” one.

Oddly, physical punishment has a stealth quality to it, which causes it to pass from generation to generation: Rarely do people reflect on their abusive childhoods and attribute the abuse to their own troublesome behavior (drug abuse, alcohol abuse, wife abuse, road rage, general irresponsibility, and over-punishing their children). Rarely will an abusing parent of a delinquent admit that their over-punishment of that child caused his/her aggressive or defiant behavior. Invariably, their children’s bad behavior is blamed on their “bad friends.”

Finally, our data indicates that peer group influence is over-rated–bad friends can have a multiplier affect when a lot of troubled kids get together and encourage each other to act out, but non-beaten kids who hang out with bad friends because they live in bad neighborhoods usually trot home when the trouble begins. We were struck with the minimal impact of peer group influence on children who are essentially not angry. Bad friends do not make bad kids; bad parenting does. If we all stopped hitting our children today, the level of violence in society would drop like a stone in later generations.

7 thoughts on “Don’t Believe Everything in the News: What Pro-Spanking Research Misses”