By Kit Jenkins, babywearing educator for Babywearing International, communications coordinator for API and a co-founder of The Carrying On Project, www.carryingonproject.org

One of the best things about Attachment Parenting is the consistency in all of its principles. Everything is done from a perspective of mutual comfort and respect for the whole family. It creates an ongoing safe and comfortable environment, even when the outside world gets crazy. For military families, often “crazy” is part of the daily programming. Parents are in and out of the home for days, weeks or months at a time; there is often lots of moving, new people to meet and places to go; and there is so much chaos. For a grown adult, it is an adjustment. For children, it can be terrifying. To help combat that, more and more military families are turning to Attachment Parenting, either pieces of it or sometimes “the whole enchilada.” 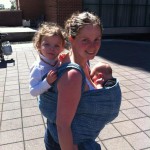 Like many military families I have spoken with, we stumbled into Attachment Parenting almost by accident. My husband and I had a courthouse marriage a few months before our ceremony. We knew that we would also be in the middle of moving to our next duty station on the other side of the country and wanted things to be as seamless as possible. The day we signed on our first house, bought in Colorado from New York City, we also found out we were pregnant.

Once we arrived in Colorado, I started looking at prenatal classes. We were pointed by family to the Bradley Method because I wanted a natural birth. I am allergic to several kinds of medication, and decided that the less I had to potentially die from, the better! Through our class we learned a little bit about various parts of “crunchy parenting,” as my husband called it, and we knew that we wanted to do some of it but weren’t sure about all of it. We knew we wanted to breastfeed and cloth diaper, and were mildly interested in babywearing, but we didn’t want to co-sleep, had made no real decisions about disciplinary approaches, and so on.

As we got closer to my due date, however, we discovered that my husband would be leaving for Iraq around the time of the baby’s arrival. He managed to get his deployment delayed long enough to be around for the birth, but he left less than two weeks after, leaving me with a tiny, adorable, but occasionally very angry baby girl.

We were given a few slings by friends who couldn’t use them, and while I didn’t get to wear D until she was almost 6 weeks old, Dad and my mother wore her almost immediately because the sling fit them. D nursed like a champ and slept in the Pack-N-Play by our bed. The first night we had the house to ourselves, I fell asleep nursing her in bed, and she stayed there with me. I felt amazing when I woke up the next morning, and despite all of the terrible things I had been told would happen, I still had a beautiful baby girl, and she was blissfully asleep next to me. “Hmm,” I thought to myself, “maybe I should look into this.” 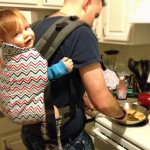 As the days turned to weeks, I discovered that she was generally very easygoing but every so often was inconsolable, which I found out later was due to food allergies. I am also fairly petite, and hauling that car seat around everywhere was getting old quick. I found the local babywearing group, and it being so close to five bases in one town, a lot of its members were military families. In fact, the the first meeting was held at the home of a woman whose husband was actually in the same battalion as my husband, and he was deployed, too. The group members showed me how to wear D, but it was also the first time I was able to really sit down with more military families. I had a question I just had to ask.

For some of them, it was their fifth child and their seventh deployment. I felt like they were seasoned experts and had all the answers, which were overwhelmingly the same. They kept their families functioning and together by keeping them close. Babywearing made it possible to do household chores, co-sleeping made it possible to get enough rest and, for some of the toddlers, it helped with a sense of security and kept out night terrors. Consistent, positive discipline helped maintain trust and connection. While under no circumstances is a deployment ever easy on a family, it was becoming more apparent that the parents who were applying AP principles were struggling a little less.

I also connected with other spouses outside of my babywearing group and found that even the ones who thought Attachment Parenting is for hippies were unknowingly making AP-inspired decisions, as well. They told me about how it was easier on all of them when the kids slept in the same room or the same bed, either with or without parents, because it helped them connect and feel secure. And about how they realized that some of their child’s “acting up” was based on environmental changes, so they started responding differently than they thought they ever would have, and what a difference it made. One mom told me, “You can’t spank a deployment away. You can hug your way through it, though.”

As a former active duty member myself, when the women and men I went through training with started having children, it was interesting to see who was doing what. There were some that took cues from what I was doing because they saw it on Facebook, and others who I reconnected with later on had also been using the AP parenting style because they had decided that it made the most sense for their lives. Something a dad I knew from boot camp told me resonates deep. “With all of the crazy we see at work, whether in or out of country, it’s wonderful to know that there is peace at home.”

We are on our fourth duty station in almost four years, and I have seen the same attitude over and over again. More military families are starting to embrace Attachment Parenting, to the point that some bases have their own Le Leche League groups, and the areas around bases have babywearing groups, API groups, Natural Parenting playdates, etc. Babywearing, especially, has proven to be quite popular around the military bases. The parents come to the meetings for babywearing, and they stay because they find they have a lot in common regarding parenting techniques with the people they meet.

As we celebrate April as “Month of the Military Child,” think about how you can help a military family out this month. Maybe it’s babysitting another child for a few hours so the parents can go on a date, or if one is deployed, so that the other has a chance to even just shower alone. Maybe it’s inviting that new mom to an API meeting or a playdate or out to lunch so that she’s not sitting in her house by herself, watching the clock tick. Something little from you could make a huge difference to a family that’s struggling.

There are also two organizations that work to get free baby carriers to military families to help make their lives easier.

The Carrying On Project (www.carryingonproject.org) works with families dealing with a deployment, training exercise or a loss.