Natural childbirth has always been fascinating to me. There is something so beautiful about bringing forth life the same way millions of women around the world have throughout the ages. So when we became pregnant, I had already begun the mental and physical preparation that would eventually lead to a perfect, natural birth at a birth center. I had read all of Ina May Gaskin’s books, watched The Business of Being Born, and had picked the brains of the other like-minded mamas that I knew. I was prepared! And childbirth ALWAYS goes exactly as we plan, right? 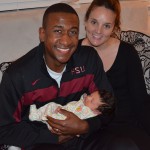 For most of my pregnancy, I was under the care of the midwives at a birth center. Our pregnancy was uncomplicated, and we were breezing past all of the milestones we needed to hit in order to birth at the center. We had completed a natural childbirth course, were  preparing with a doula, had meticulously written out our birth preferences in case of a hospital transfer, and had our bags packed and waiting by the door. But, as my mom regularly reminded me throughout those nine months, the first lesson of motherhood is that you can’t control everything related to your children, and our little one certainly had plans of her own.

Editor’s Note: Attachment Parenting International invites parents to share their birth stories, without endorsement of their decisions regarding their child’s birth. None of this information should be interpreted as medical advice. Click here for more information on our views regarding childbirth.

At about 36 weeks, we realized that this baby was frank breech and wasn’t turning. Initially I was disappointed, as a breech baby meant no birth center. So we tried everything—a chiropractor, an acupuncturist, and hours each day inverting myself while simultaneously attempting to bribe the baby with music, flashlights and frozen peas (really—Google it). I stayed hopeful until about 39 weeks, and then I decided I needed to let go. As my midwife beautifully put it, it wasn’t my baby who needed to turn, it was me who needed to turn.

Thankfully, we had a very wise doula who had complete belief in a woman’s body and in her natural ability to give birth. She suggested I research vaginal breech births because we needed to be informed consumers. I remember coming home from work that afternoon almost in a daze—my birth plan was already changing, and I wasn’t even laboring yet! I spent my entire evening that night doing my research, and we came to the conclusion that, in the hands of a capable, trained professional, a vaginal breech birth is entirely safe and was definitely the route for us. Any medical causes for our breech baby had been ruled out—our baby’s breech presentation was simply a variation of normal.

Our research suggested that vaginal breech births are discouraged in mainstream obstetrics today not because they are inherently riskier than cephalic presentation (head-down) births, but because birthing a breech baby is, sadly enough, a dying art that is not being passed down to our new generation of obstetricians. My doula guided me to an incredible OB, Dr. Fitzhugh, who is known throughout our childbirth community for allowing (and supporting!) women to attempt natural vaginal breech births. I met with him on a Monday, when I was 39 weeks along. I felt so safe, secure and supported knowing he would be by my side that I gave birth with him that Thursday, one week early.

The night I would begin active labor, I attended my prenatal yoga class and decided to resume my deep squats, since I was now fully accepting of a breech birth and not worried about engaging something (an arm, a foot) too early. So, squat away I did! At about 3:30 the next morning I woke up with a “different-feeling” contraction—longer and stronger than the contractions I was having earlier in the week. I subsequently had four more of those contractions, each exactly 10 minutes apart. Remembering the 5-1-1 rule, I called my doula and Dr. Fitzhugh, then made myself some eggs, took a shower and relaxed downstairs on the sofa.

Dr. Fitzhugh checked on me two hours later, and at that point the contractions were much longer, stronger and less spaced out. He wanted us to come to his office so he could check me. I didn’t like this idea at first because I wanted to labor at home for as long as possible, but he had listened to me have some contractions over the phone, and I really think the man just knew. So we loaded up the car, and hubby nervously drove to the office. And yes, contractions in the car weren’t fun. Dr. Fitzhugh checked me, and I was 5.5 cm dilated and fully effaced, so it was time to go to the hospital. We were stunned. It became very real that our little one was going to be there THAT DAY.

We arrived at the hospital at 8:05 a.m. (after hitting rush hour traffic—more fun-in-the-car-while-in-labor), and I labored pretty hard for two hours. But I only made a little progress and was 7 cm dilated when he next checked. Our agreement was that I had to have a spontaneous, natural labor, and I had to “prove” that my body was able to do this, since I was a first-time mom. Basically I needed to make lots of progress pretty quickly, otherwise we would need to have a C-section. When I only made 1.5 cm of progress in two hours, Fitzhugh quietly and gently leaned over me and told me to remember our agreement and just prepare myself in case we had to change plans.

At that point my husband, doula, and the INCREDIBLE nurse I was blessed with got me out of bed and kicked my butt into gear. (My two cents’ worth is to stay out of bed as long as you can—get on a birth ball, get in the shower, squat, dance with your partner, just keep moving!). As soon as I stood up, I had four contractions back to back, each 75 seconds long. I then did four full-standing squats holding on to the bed, until my water broke, which was totally encouraging for me and gave me new hope. Then my support group got me up on the bed for more squatting. And in the next 30 minutes I dilated the rest of the way—from 7 cm to a full 10 cm! Dr. Fitzhugh came back in the room, leaned over me once more and grinned, “You proved me wrong. It’s time to have this baby the old-fashioned way.”

With just a few pushes, her bum was out, followed by her little legs unfolding, followed by first one arm then the next. With a few more big pushes and lots of maneuvering by Dr. Fitzhugh, after not even 30 minutes of pushing, little Lucie Renn was placed on my chest at 11:06 a.m. Actually she was placed on my stomach—her umbilical cord was so short that she couldn’t reach my chest. This was also the reason she was breech and wasn’t able to turn, reinforcing our “breech is a variation of normal” belief. The feeling of her warm, little, slippery body on my stomach was pure ecstasy. She came out with her eyes WIDE open, craning her neck to search for my face, and our hearts melted.

Even though my actual birth experience was very different from the one I had been planning, I would not change a SINGLE thing about it. This was the way that Lucie needed to come into this world, and once I embraced that, I was able to have the most beautiful, special birth—even better than what I could imagine. Am I encouraging every woman with a breech baby to attempt a vaginal birth? Of course not. I am, however, encouraging every woman and partner to become informed consumers. Know the risks, know the benefits, and make an educated decision for your family.

2 thoughts on “A Breech Birth Story”