By Zoe Claire, originally published on www.unnecessarywisdom.wordpress.com. Reprinted with permission. 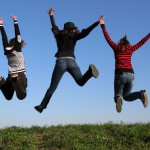 Children are in our care for a limited amount of time, generally spanning two decades. During that time, their needs change drastically yet gradually from year to year. I’ve always found it odd that the principles of Attachment Parenting are criticized as promoting dependence in children when, if you analyze the proper development of independence in childhood, the attachment style would be considered the ideal method for raising competent adults.

Attachment style parenting is based on Attachment Parenting International’s Eight Principles of Parenting. These principles are designed to guide decision making with a focus on infancy. But the overwhelming theme of the attachment style is the sensitive responsiveness of the parent toward the child. This responsiveness is directed at meeting the child’s needs in a loving and respectful manner.

The meeting of needs is a critical concept.

The end result of meeting a child’s needs is varied yet always positive. A child whose needs are consistently met learns that his voice is heard, his communications are valued, his needs are worthy, he can rely on the world to be a safe and secure place, he can trust his parents both for comfort and guidance, and he is competent.

We are most effective leaders when we teach from a place of love and trust.

Think about a time when someone tried to change you or what you were doing. How did you feel? Now think about how you felt about that person. Did you believe the person had your best interests at heart? If you did, you probably felt positive about the experience, whether you accepted the advice or not. If you believed the person did not understand you, did not care about you, or was only trying to promote their own interests, then you probably felt bad about the experience and certainly rejected the advice. We can only create true change from a position of love and trust. This is a truth of humanity.

Why do so many people worry about Attachment Parenting leading to dependent kids?

Those who don’t understand API’s Eight Principles of Parenting can often confuse meeting a child’s needs with stifling independence. An infant is at the beginning of her experience as a human. She begins her life without the ability to help herself in any way. She is entirely dependent on her caretaker. One aspect of meeting her needs is understanding what her needs are. She has not reached the stage in her development yet where she is capable of independence or desirous of it. The securely attached parent recognizes this need and attends to her accordingly.

The result of this sensitive attendance to the child’s needs is a child who has a secure foundation to begin her journey toward independence.

How does Attachment Parenting foster independence?

The drive for independence is as natural to humans as breathing, sleeping and eating. The securely attached parent is able to recognize when the child needs and wants independence and not only allow him to stand on his own two feet, but encourage him as well.

Independence occurs gradually, throughout the two decades of childhood. We do not need to force it upon a child before she is ready and should not hold her back when she is.

Responsive parents can see when their 2-year-old is demanding to pour her own milk and allow her to so. This is meeting a need. It’s a new need, different from those in infancy, but a need nonetheless. So she is allowed to develop necessary skills as she is ready.

As soon as a child is capable of caring for himself, he should be allowed to do so.

Connected, responsive parents can observe when their child is ready for independence and are able to encourage him. He wants to dress himself? Allow him. It doesn’t matter what he wears. It matters that he is able to care for himself. If he still needs to be close to his parents when he sleeps at night, that’s okay, too. It’s about fostering the child’s desire for independence. It’s about meeting needs. His need for independence is as legitimate as his need for security. Both are met with sensitivity, predictability and love.

What the child learns as she grows is that she is capable and secure. She learns that independence is a positive experience for her, as she masters each new skill. She learns that all of her needs will be met, regardless of what they are or how someone else feels about them.

As the child progresses through childhood, her need for independence will increase while her need for physical closeness to her parents will decrease. But the confidence she has in her parents is what links the two.

What does Attachment Parenting look like in the teen years?

I’ve seen articles proclaiming that parents must detach from their children during the teen years. I believe this is a misunderstanding of what attachment is. The attachment is the relationship, the sensitivity, the unconditional willingness to meet the child’s needs. A securely attached parent is able to recognize that the child’s needs during the teen years have changed and will continue to change to adulthood.

Think about this teen for a moment. This is what all parents want. This is a teen who knows when she has a problem, she can trust her parents as a resource. She will talk to them about it. She doesn’t rebel. She has nothing to rebel against. Her parents are allies in her life. They always have been. Nothing magically changes because of her age. They are still watching her, listening to her, anticipating what she needs from them and responding to her with sensitivity. She will take their advice more often than not. She knows that they want the best for her. They don’t disregard her, brush her aside or bully her. They never have. Sure, she might make mistakes. Everyone does and teens are more susceptible due to their inexperience and youth. But she has parents to guide and teach her. And she is still willing to accept their love and support.

We all want the same things for our children. We them to be happy, successful, independent, competent, kind, loving, empathic, responsible adults when they leave to go out into the world. We are not always so sure how to get there. While we all have to find our own way as parents, this I do believe: you can never go wrong meeting your child’s needs, no matter what the needs may be.