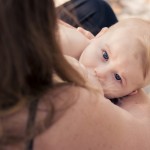 In May 2013, a Kickstarter campaign was launched to raise funds for an innovative art exhibit featuring the work of photographer Christine Santos: “Nursing is Natural … Naturally Beautiful.” This exhibit was intended to revolutionize and challenge the way Americans view breastfeeding by portraying over 50 nursing mothers, inviting people to think differently about the way our society views breasts. API’s Rita Brhel asked Santos, a doula and birth photographer at Psalm 139 Studios (www.psalm139studios.com), to share more about the exhibit, which took place September 20-October 15, 2013, at the {Tay’-Cho} art gallery in Bartow, Florida.

Rita: Tell us about how the project began. What was the inspiration?

Christine: In February 2012, our La Leche League group sat discussing the impacts of a campaign that had been run in Texas to promote the normalization of breastfeeding and to bring awareness of the stigma associated with this act. The conversation turned to the cultural environment of the area in which we lived. We decided we needed to normalize breastfeeding for our sons and daughters. We needed to do a similar campaign in our county.

Rita: How did you become involved? What inspired you?

Christine: I offered to capture the images and be the liaison between the La Leche League group and the WIC program/Department of Health. After much conversation, it was revealed that WIC/DOH did not desire to utilize images of local women to promote breastfeeding in the area. The project stalled until an alternate option presented itself. I took part in an exhibit called “Trust Birth,” which gave me the idea that organizing an art exhibit might be a viable option for spreading awareness of breastfeeding.

After realizing an art exhibit could be the way to reach thousands of people to promote breastfeeding and challenge viewpoints, I reached out to local motherhood groups for volunteers. I knew if we were going to promote breastfeeding accurately, we would need women of all backgrounds, ethnicities and ages of children. The feedback from this model call was overwhelming. 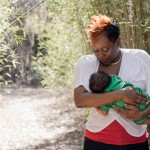 Over 30 ladies signed up to be photographed for the exhibit, and many more were turned away. The images and the idea of the exhibit gained momentum, and word spread through social media. It quickly became obvious this was something the breastfeeding community had been longing for. The support was phenomenal.

The event details caught the attention of a local television station, and I was interviewed. That interview spawned others, and the media attention went global. CBS, NBC, Latina magazine, Initiativ Liewensufank and Huffington Post were just a few of the media outlets that carried the story. Funding poured in, and something that began as a dream in a local La Leche League meeting became a reality.

Many local businesses helped with the sponsorship of the exhibit, but three contributed both in time and money: Punger Family Medicine, Effortless IT, and Lorrie Walker Public Relations. Their commitment to the success of the exhibit and to the promotion of the normalization of breastfeeding helped make the exhibit the success it was. Without their hard work and dedication, “Nursing is Natural” would not have been able to happen.

Rita: How will this project contribute to the breastfeeding community, parenting and other segments of society?

Christine: This exhibit has helped promote the normalization of breastfeeding in a big way. It has sparked conversation and caused people to question their previously held views about breastfeeding. It has opened the doors for other artists to promote similar work in their cities, thus opening the door for further discussion about breastfeeding. We have seen heart changes happen as open dialogue occurs between nursing mothers and skeptics. These were the goals of this exhibit, and we see them happening still, even months after the exhibit’s initial opening. 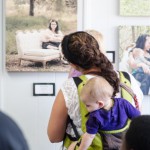 Our hope is that we will be able to find other galleries in which to show the images. That we can continue to spark dialogue through open sharing and discussion. That we can normalize breastfeeding so our children can one day breastfeed their own children without fear of backlash. That the nursing that was once the norm for the care and comfort of our children will be the norm once again.

Rita: How will this exhibit benefit families?

Christine: This exhibit has benefitted families in that it has helped empower women to take a stand for their babies and their right to feed their babies how they see fit. It has enabled them to find their voices, to speak up for what they believe is the best choice for their babies, and to stand up against those who would shame mothers for making that choice. It has given fathers a voice to stand up for their families’ choices and for their partners’ and babies’ rights. It has allowed dialogue to occur that puts parents and families on the same page, or at the very least with an understanding of where each of them are coming from. This exhibit has fostered solid communication for the benefit of children and families.

Rita: What are your views of Attachment Parenting International and what API is doing?

Christine: There are many organizations that are helping to facilitate this type of communication. We believe Attachment Parenting International is one of those organizations. API works hard to promote the bond between care providers, families, and children. API stresses the importance of family and tribe support, and they encourage parents to take a more active role in their children’s developmental years. These concepts work hand-in-hand with what Psalm 139 Studios is trying to do in the world of bellies, birth and beyond. We are excited to see what the future has in store for both organizations.

Available now! The Attached Family magazine “Voices of Breastfeeding” double issue. This fantastic resources is free to API members–and membership is free. Get your copy today!

2 thoughts on “The Beauty of Breastfeeding: An Interview with Photographer Christine Santos”