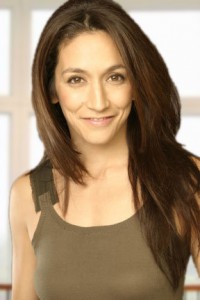 From the beginning, 20 years ago, Attachment Parenting International has been a community of parents coming together to support one another in raising their children with trust, empathy, affection, compassion and joy. We may come from very different backgrounds and cultures, but we are all alike in our approach to relationships with our children and our willingness to advocate for this in our communities around the world.

RITA: Thank you, Elisa, for your time. To begin with, please tell us about your career in acting and theatre.

ELISA: I’ve had some fun roles in The Unit, Invasion and Numbers. I’m also a martial artist and acrobat, so I did stunts for the kids’ shows Power Rangers and Big Bad Beetleborgs. For theatre, I did a number of shows at San Diego’s Old Globe Theatre [California, USA], including the world premiere of Stephen Sondheim’s first straight play, The Doctor is Out. I’ve also been seen in Los Angeles at the Kirk Douglas Theater in A Very Old Man With Enormous Wings, with Los Angeles Opera in The Imaginary Invalid, with Will and Company, and with Shakespeare Festival/LA.

RITA: Many parents value involving their children in the arts, including theatre, and we’d all like our children to do well in their activities. As an actress, how can parents support budding performers?

ELISA: Children who learn how to perform on stage learn how to present themselves to the world. They learn control of their bodies, projection of their voices and how to be themselves even when someone is looking at them. No matter where a child goes in life, these are valuable skills that they can take with them.

The caveat, of course, is that these skills can only be learned in a loving environment. Parents can very easily make performing, which is an intensely personal act, into a terrible experience where children can feel as though they have done their best and been rejected. It’s important to remember that your “goal” as the parent of a performer should not be to make them the best no matter what the cost. It is highly unlikely that this is what they want or need. Your goal should be to nurture and accept your child and do what you can to help them reach their own goals. What you say makes a difference.

ELISA: My mother was a very sensitive mother who thought that children were just little people and deserved the same respect that adults did. When I became a mother, I brought that ideal with me.

When I was pregnant, my mother researched parenting books and bought me a copy of Dr. William Sears’ The Baby Book, which made a huge impact on me. I had never thought of cosleeping before—I thought it was dangerous to do before I was educated—and although the idea of babywearing seemed convenient, I learned that it is very good for the baby, too.

I spent so much time when I was pregnant doing research about natural childbirth, Attachment Parenting, child brain development and pregnancy!

RITA: That is wonderful that you had a great role model in your mother and that you had the foresight to prepare for parenthood during your pregnancy, as API advocates through the first of our Eight Principles of Parenting. How has Attachment Parenting benefited your family?

ELISA: My husband and I have an extremely close relationship with our son. He’s an extremely bright, fearless boy who is endlessly creative and so much fun for us. I also got a wonderful bonus that I never expected: Through the unconditional love that I give to my son, I have finally been able to accept myself in all of my gloriously flawed humanity. I never realized how hard I was on myself before I was a parent. Now, in showing my son how to love himself, I’ve become as kind to myself as I am to other people!

My son was definitely what Dr. Sears calls a “high-need baby,” who just needed more than other babies do. He didn’t want to be on his own at all for the first few years, but because I gave him such a secure base and never forced him to be “independent,” when he was ready, he went forth on his own. Now as he approaches his fifth birthday, he is a very articulate, confident child who loves to perform on stage, go to school and do other things on his own with joy. Because we have such a strong, securely attached relationship, when he comes home, he loves to tell me all about his day and any things that happened that concern him.

Before I became a parent, I had always heard that until you have a child, you will never experience the depth of love that parenting brings. That is definitely true. But Attachment Parenting has brought so much more to us than just love: It’s brought a sense of confidence and self-worth to my son—and to me.