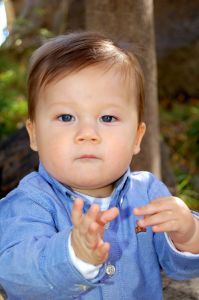 I was never one of those people, pre-kids, who romanticized parenting. I worried instead about how my baby and I would communicate and how I would deduce from her cries the action required to meet her needs.

My sister had used some basic baby signs with my niece Dakota, teaching her to sign “more” and “milk,” but the significance of this seemingly simple form of communication didn’t hit home until one afternoon when my sister was trying to help Dakota fall asleep by giving her a backrub. When she stopped, Dakota sat up and signed “more.”

I was fascinated by how she had extrapolated a sign previously used only to request more food to ask for more massage. In that moment, I realized the potential that signing had for a deeper level of communication.

We’ve used it twice now, with two different approaches, both times with success, connection, and unimaginable delight. It allowed our sweet ones to communicate their needs and interests while providing us with ever-amazing glimpses into their complex minds. With each sign, it was evident that our recognition and understanding of their communication gave a sense of confidence to our preverbal children as well as showed them we were interested in what they had to say. I’ve come to realize that it is not only helpful in understanding my baby’s basic needs but has opened up a rich and ever-rewarding vehicle of sharing my child’s excitement for the world.

When our firstborn, Aviv, was about six months old, we began showing her a couple baby signs, following the advice in Baby Signs by Linda Acredolo and Susan Goodwyn. At eight months, Aviv signed “flower” for the first time and began to use it to point out flowers everywhere. A week later, I sat nursing Aviv in my in-law’s home where we had been staying for an extended visit. We had talked often about the vase of silk flowers sitting on our room’s dresser. I sniffed loudly to clear my nose. Aviv stopped nursing immediately and turned to look at the bouquet. She smiled and signed “flower” and then laughed. This was our first adorably brilliant signing miscommunication, opening the door for more communication: “You thought when I cleared my nose I was talking to you about the flowers! My nose is stuffed up and I need to blow it, so I was sniffing.”

At 10 months, Aviv began signing “dog.” The first time she used the sign, we were taking an evening stroll and she “commented” on the incessant barking of a neighborhood dog. She began signing “dog” to communicate about anything related to our pooch, like when she played with Maya’s leash or passed her water bowl. “Milk,” “eat,” “fan,” and “hat” soon followed. We were amazed at how much of the world she understood without our full comprehension minus this under-used communication device. When, compelled by our own fascination, we would note to a stranger that she was signing “water” because she saw a river in a painting, the question inevitably asked was if she was deaf. Most people have never heard of baby signing. One friend commented that our babies seemed so aware, and what we were learning is that they all are in degrees both staggering and easily discovered with American Sign Language (ASL).

Aviv was signing five signs at one year old when my husband’s boss told him how her daughter had been slow to talk and that learning to communicate through sign language had decreased her frustration and limited tantrums. She offered to loan a video series called Signing Time to us if we were interested. I hesitated as I wanted Aviv to be media-free, yet I also recognized the value and impact of sign language not only on her ability to communicate but also on our relationship with her. She was no longer unable to communicate what she saw. For instance, when she was 11 months old, I had my hair wrapped in a towel. Aviv signed “hat,” which gave me the insight needed to explain, “Yes, this towel goes on my head just like a hat does. I put a towel on my head to dry my hair some before I brush it.”

When Aviv was 12 months old, we were driving along in the car and she pointed out the window and signed “tree.” As we talked about the newly leafed trees, she signed “gentle” and “flower,” identifying our past discussions of being gentle with flowers and allowing me to link all of these thoughts together. At 14 months, she signed “potty” emphatically as I pulled the trashcan down to the curb. I looked around, knowing there was a clear reason if I could discover it. Our dog was peeing on the lawn behind me, so we got a laugh together and I told her, “Yes, Maya sure is going potty! We go inside on the toilet, but she waits until she is outside to pee in the grass.” So many conversation-starters and continued language acquisition began through our children’s ability to allow us to enter their world with a reference point. END_OF_DOCUMENT_TOKEN_TO_BE_REPLACED