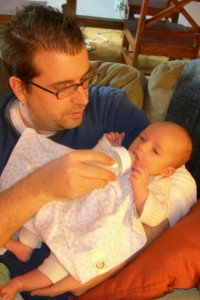 If we’re staying at home to be with our babies full-time, we don’t have to pump milk or offer bottles. We can delay extended separations until our children are older, take our babies with us to run errands, go to appointments, or when we meet friends. And most of the time, we do. We spread out activities, so we can avoid taking Baby in and out of the car for multiple stops. We keep the volume low on the car stereo. We prioritize what we need to get at the grocery and find ways to entertain or distract Baby, so that we can get everything on the list. And we likely plan it all around when Baby may take a nap. That’s what stay-at-home moms do.

What differs for attached moms is that we are likely also sleeping with or near our babies during the night, wearing them during the day, and nursing them every hour or so. Being an Attachment Parenting (AP) stay-at-home mom is an intense 24-hours-a-day/365-days-a-year job.

While all of the mothers that I interviewed agreed that breastmilk from the breast is best, AP stay-at-home moms have many reasons to pump: END_OF_DOCUMENT_TOKEN_TO_BE_REPLACED

By Grace Zell, staff writer for The Attached Family 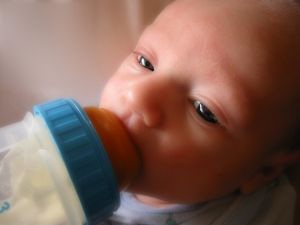 When I was pregnant for the first time, I wasn’t sure what I would do and I was actually a little afraid of committing to breastfeeding and being my child’s sole source of sustenance.

After my son was born, I decided to combine breastfeeding and bottle-nursing. I was ready with a breast pump, sterilized bottles, and formula. My son was a very alert and agitated infant, and he awakened every hour during the night in the beginning. Bottle-nursing gave me the ability to sleep for a four-hour shift while my husband took over. I had planned to fill the bottles with breast milk, but my son was such a high-needs infant that I fell behind with pumping and, after about three weeks, gave up completely and used formula in his bottles.

An Early End to Breastfeeding

I had been unable to get my son to latch on for nursing and did not get very nurturing support from the lactation staff at our hospital. They had led me to believe that I wouldn’t be able to pump and bottle-nurse. (I have since seen women who pumped for several months without their baby actually nursing and a woman who got her infant to latch on after about three unsuccessful weeks of trying.) END_OF_DOCUMENT_TOKEN_TO_BE_REPLACED

It was a big day for me, my husband, and my daughter. In mid-January, seven months after Rachel was born, when she had reached 18 1/2 pounds and 26 inches long, her pulmonologist told us she was ready to come off the cardio/respirations apnea monitor that had been a constant part of her life since she left the hospital five months earlier. I was nervous, but her doctor told me that it was OK – in all his many years of practice, he had never seen a healthier looking preemie than Rachel.

It was a great compliment. My daughter was born in June at 30 weeks gestation, due to a significant placental abruption, a serious pregnancy complication in which the placenta prematurely separates from the uterus. Weighing three and one-half pounds and measuring 16 inches long, Rachel was nearly three months early.

I had been planning a drug-free childbirth, but what I got was anything but easy, natural, and beautiful. It was traumatic for me, both emotionally and physically. I had been in the hospital for four days after hemorrhaging, and I was being treated with several anti-labor drugs, one of which (magnesium sulfate) left me so weak that I required oxygen. I was given an epidural in case I needed a C-section, and I had an episiotomy that became a fourth-degree tear and later acquired an infection. This was not the childbirth of my birth plan. END_OF_DOCUMENT_TOKEN_TO_BE_REPLACED