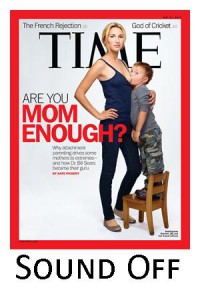 There is still a lot of discussion centering on Attachment Parenting, even though the controversial TIME coverage was almost three weeks ago, which is equal to eons away in our instantaneous, cluttered, sensationalism-saturated mass media. You know that something – some issue, some news story – has made it big when it’s still being talked about this long after the buzz first began.

TIME is hardly the first to bring Attachment Parenting into mainstream light and not necessarily in a good light. In all fairness, the articles included in the TIME package on May 21, 2012, were probably the most fair, least biased of any mainstream coverage on the parenting style that I’ve seen. But it still perpetuated a lot of myths: One that particularly irks me is the claim that there is no research to back up Attachment Parenting, when in fact it is very well researched and one of the branches of research where there are very certain results, with studies all pointing in the same direction rather than some studies contradicting one another.

One of the myths that is particularly virulent – but then again, always has been – is that Attachment Parenting equals mommy martyrdom, that it asks too much of parents. I find this a little comical, because what does that say about you if you think that there is a parenting style that asks too much of you? As if your child isn’t worth it. Are there parents who think that way? I hope not.

What the argument is really, is revealing an overall lack of a sense of individual balance in our Western society. Asking us to do a little more for the betterment of our children, whom we love, wouldn’t be such a big deal if the majority of parents didn’t already feel tired and overworked and severely lacking some “me” time. If our emotional cups were already full most of the time. But they’re not. As a society, we seem to be constantly seeking contentment, chasing happiness.

There are plenty of theories abound of why this is, but I see it as our society asking too much of us. Mothers are supposed to work and raise children, and really, there are not many mothers who have a choice between working and staying at home. It isn’t a matter of selfishness but often out of necessity; rising food and fuel costs, access to affordable health insurance, debt, divorce – all these contribute to mothers’ lack of options. And at the end of the day, many mothers feel responsible for the housework as well.

What scares parents about Attachment Parenting is that it’s another thing to do, that it’s something else that they really need to do but just cannot get to, that not doing it could have real and lasting consequences and they already feel guilty of what they perceive to not be giving right now. Attachment Parenting isn’t asking too much of parents but too much of people who already have too much going on in their lives. To give our children as much time and energy that parents are imagining that we “attachment parents” give, well, it would require that they give up on something in their life – and that would probably be the only thing in their life that gives them any sense of personal balance. It would require them to completely overhaul their lifestyles and re-learn how to be content with a slower, simpler life – one where personal happiness wasn’t dependent on more, more, more.

This change in thinking would be daunting in the least – for some, impossible, unless they were willing to face and address their own unmet needs for emotional balance, and change the very way that they strive to meet that unquenchable void: by switching their priority away from materialism and instant gratification to quality relationships that require patience, commitment, sometimes hard work without meaningful results, and character strength.

That’s not the core of Western society, and that’s why Attachment Parenting isn’t yet mainstream. To “attachment parents,” it can be frustrating that attachment-promoting parenting techniques aren’t more widely accepted –shouldn’t love, that emotion that everyone desires to feel authentically, be an obvious way to raise our children? But for Attachment Parenting to become more mainstream, it couldn’t come by force or policy – that isn’t our way as “attachment parents,” anyway. It would have to come by a shift in our societal attitude.

Various parenting approaches are usually categorized as either child-centered or parent-centered, and there is great contention about which is better for both children and parents. Child-centered, critics say, compromises a parent’s sense of balance and may lead to children feeling entitlement. Parent-centered, critics counter, compromises a child’s need for parental attention and attunement.

But is this polarization, this black-and-white, all-or-nothing thinking, reality? Should we be debating for which is the better of the two “evils”?

The reaction by critics of Attachment Parenting is – instead of understanding the ins and outs of what it indeed means to have a secure parent-child attachment bond – is often to recommend a complete overhaul on the parenting principles: shut the child in the bedroom and let him cry himself to sleep alone, schedule feedings, punish and shame and ignore requests. As if doing the very opposite of their perceived fears is anymore healthy? END_OF_DOCUMENT_TOKEN_TO_BE_REPLACED

By Shoshana Hayman, director of the Life Center/Israel Center for Attachment Parenting, http://lifecenter.org.il

It’s not so much that pediatrician and author William Sears, MD, has remade motherhood, as TIME magazine suggested, but rather that he has revived within mothers their own ageless intuition. He has helped women restore their own confidence in themselves as mothers, which has allowed them to live their motherhood out loud. But putting the focus on breastfeeding, cosleeping, and babywearing have unfortunately reduced Attachment Parenting to these three practices alone. These are not the heart and soul of Attachment Parenting.

Attachment Parenting is a concept much greater than physical closeness. A mature parent-child attachment means that the parent and child are connected at the heart: The child can share what is within his heart with his parent; the child seeks his parent’s advice and guidance and shares values. The relationship exists securely even without physical proximity. It takes years for a relationship to mature to this stage. It unfolds slowly as the parent takes the lead in providing what is needed for the relationship to develop and deepen.

In the beginning, the relationship is characterized by a drive to seek and maintain physical closeness. But physical proximity through the senses is only the first stage of this attachment relationship, and during the first year of life, it is the only way that babies can attach. Breastfeeding, cosleeping, and babywearing certainly stimulate the senses and keep babies physically close to their primary caregiver – Mama – but they are not the only ways that a parent can provide for the child’s attachment needs. If attachment through the senses and physical closeness remain the only way of attaching, the relationship will be shallow, insecure, and prevent the child from becoming his own person. END_OF_DOCUMENT_TOKEN_TO_BE_REPLACED

“The question should not be, ‘Are you mom enough?’ The questions should be:

If the answer is ‘yes’ to these questions, you are practicing Attachment Parenting.  You can reasonably expect that your child will become emotionally secure, will be able to give and receive affection, and will lead a productive and successful life.”~ Isabelle Fox, PhD, author of Growing Up: Attachment Parenting from Kindergarten to College, in response to Time magazine’s feature article “Are you Mom Enough?” on May 21, 2012

What does Attachment Parenting look like? That depends on who you ask.

Attachment Parenting is an approach to childrearing, independent of a parent’s lifestyle. What this means is that instead of centering on specific rules, such as that a mother must breastfeed or bedshare or stay-at-home, the Attachment Parenting approach shifts the parents’ focus to meeting the individual emotional needs of each child, interdependent with the needs of the parent and the family as a whole. It is a family-centered approach to parenting through which children are responded to consistently and sensitively, depending on their development, but treated with the same respect and value as an adult, yet without sacrificing the parents’ needs for personal balance. END_OF_DOCUMENT_TOKEN_TO_BE_REPLACED