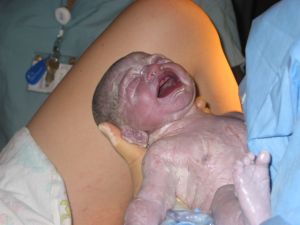 Choosing to have a natural birth is such a personal decision. Everyone has their reasons to have, or not have, a natural birth. Several girls have tried to get me to talk them into having a natural birth, but I just won’t do it – because I can’t. I can’t do it for someone else; it has to be her own decision because she is the only one who is going to be experiencing the birth, and my own personal reasons for doing it might not apply.

Editor’s Note: Attachment Parenting International invites mothers to share their birth stories. The following article has been published to give this mother a voice in telling her birth story only, without endorsement of her decisions made regarding her child’s birth. Click here for more information on our views regarding childbirth.

I knew that having a natural birth was my best chance for avoiding a Cesarean section or other interventions and complications of birth, and I was desperate for a good birth.

There were spiritual reasons, too; right or wrong, I was convicted by the fact that my husband would be spending his life fulfilling the curse of Adam (to work the “fields”), so I felt somewhat obligated to experience, at least once, Eve’s punishment as well (to have “greatly increased pain in childbirth”).

I had also heard of the amazing natural high that one gets after birthing naturally, and I wanted to (and did) experience it. It lasted for weeks the first time and warded off any baby blues that might have otherwise been there. In fact, I had read that the incidence of postpartum depression after natural births was close to 0% and that really spoke to me. I had also heard that birthing naturally helps you “turn on mothering” easier and breastfeed easier, due to the hormones released during labor and birth, and success in these two things was extremely important to me.

I needed confidence. Some women are extremely confident in their abilities, going into motherhood, but I wasn’t. I was scared stiff, and I needed a boost. Birthing naturally was a way for me to literally and figuratively face and conquer my fears about being a parent. I had heard that once you’ve had a natural birth, nothing ever seems difficult again. I have found this (so far, at least) to be true. It has been extremely empowering to be able to compare giving birth to other parenting (not to mention, non-parenting) challenges, beginning with breastfeeding and continuing with sleep deprivation, disciplining a toddler, and the list goes on. I can always say to myself, “If I can give birth, I can do this.”

Why have an epidural after you’ve already done natural twice? The same reason everyone else gets an epidural. It hurts! And, no, it doesn’t get less painful each time…easier and faster, maybe, but not less painful.

I was gripped with fear about the birth, due to a less-than-ideal experience with my second birth, and I felt I had to plan an epidural birth in order to let go of the fear. After my second birth, I swore to myself (and others present) that I would never have natural birth again unless I was in a better setting for natural birth, like home, a birth center, or at least a natural-friendly hospital (which doesn’t exist where I live). I also swore off natural birth unless I was to be surrounded by doulas, midwives, or at least other women who had birthed naturally. I was so tired of fighting to the death for my natural births and having people stare at me like “Why, you idiot?” while I was trying to focus on getting through a contraction, to still just be hooked up to pitocin after the baby was out in order to…what, deliver the placenta? Because that’s hospital protocol? After working so hard to birth naturally, it sucks when they hook you up to pitocin and kill your birth high.

I had also been having multiple dreams about the actual birth, and in the dreams, there was no pain or struggle of any kind. I’m a big believer in dreams and that some of them can be telling you something or explaining something, so I took it as a hint that this is the direction I should go.

With two other very small children, I just didn’t feel like my husband and I got to prepare, let alone even talk about, the upcoming birth. I wanted a free pass, a freebie – a get-out-of-jail-free card. And I felt fine about it, since the reasons that I had a natural birth in the first place didn’t really apply anymore: Mothering has been turned on and locked in the “on” position; breastfeeding almost couldn’t fail if I tried after more than three years’ experience; and I felt confident that my body was experienced enough at birth to be able to birth with an epidural. In summary, I just wasn’t up for it this time. And you have to be up for it, at the very least, in order to succeed and enjoy natural birth.

What is the difference? There is absolutely no comparison. Apples to oranges, people!

Bad birth versus good birth? No! Birthing naturally is a wonderful experience. The difference is having to labor versus not having to labor at all! Laboring with an epidural is like sitting here typing on the computer – there is no labor. Whereas, feeling one’s labor is actually really hard work, intense, pretty much indescribable. It’s just a totally different experience.

Did I like the epidural? I liked not feeling the pain and not having to struggle and work through the labor. I did not like getting the epidural. It was just as scary as I thought it would be; it seemed so unnatural to be getting a procedure done when there was no medical problem, and it felt really weird. I also felt funny not having complete control over my body and having ports and things going into me from everywhere (the previous two times, I didn’t even have an I.V. drip or monitors, so I was free to roam). And I hate needles, especially ones that go into your back. But, again, it was an experience to be able to sleep through centimeters six to ten, and then be completely mentally aware during pushing.

Do I wish I had had an epidural with the first two? No. All three births have been wonderful and memorable in their own ways. However, if I had my wishes, I would have had an epidural with my second birth and gone natural with this one, because the hospital I was in this third time had a better bathtub and my water wasn’t broken from the beginning (labor hurts more after the water is broken). I felt like I could have done it again once I reached my goal of getting to five centimeters, but I didn’t want to be fickle and I had made my mind up not to change my mind about the epidural once I got there.

Am I going to have an epidural next time? Everyone assumes that I will now be an epidural convert, but I would say that, now that I’ve had a little break, I will be more ready to face another natural birth next time. I don’t promise anyone anything, because it’s not about proving anything to anyone, but time will tell.

Few things in life are as intense, painful, scary, and mind-blowing as the birth of your child, but I would say that excitement is probably what most people remember feeling when thinking back to the day their child came into the world. At least, that’s how it was for me and my husband when I had our daughter, Sydney Rose.

I remember beginning to feel some strong contractions around 3:30 p.m. on a Sunday afternoon. I was putting some groceries away when they started, and by 6:00 p.m., they still hadn’t let up. We considered going to the hospital, but I didn’t think the timing was close enough and I didn’t want to be turned away. Besides, we had never attended a childbirth class, and we hadn’t even watched the Lamaze video we’d gotten. After dinner, we took a walk, and then settled in to attempt the video before heading to the hospital, all the while keeping a close eye on my contractions, which were getting worse by the half hour. Finally at 9:00 p.m., I said we should head to the hospital because I was definitely in more pain, the timing patterns were right on — anywhere from five to eight minutes — and I wanted to get checked before it got too late in case they were to send me back home.

We checked in around 9:30 p.m. and were told I was one centimeter dilated — one measly centimeter! They were going to monitor my contractions and check me again in an hour, and if I’d progressed another centimeter in that time, they would admit me. An hour later, I had not progressed, and although they could see my contractions were close together and acknowledged I was in active labor, it was their standard procedure to send people home and tell them to come back when the contractions were three to five minutes apart. By the time I walked in the front door of my house, my contractions were definitely closer to the three-minute mark, but I refused to get back in the car until I could barely stand it. After all, checking in, getting in a gown, waiting until the doctor can see you, getting checked, and lying around for an hour — just to be sent home — can take a lot out of an uncomfortable, nine-month pregnant woman. So I got in bed, and basically writhed in pain for five and a half hours, with minute-apart contractions until, at 4:30 a.m., I decided I was getting in the shower and then going back to the hospital. END_OF_DOCUMENT_TOKEN_TO_BE_REPLACED